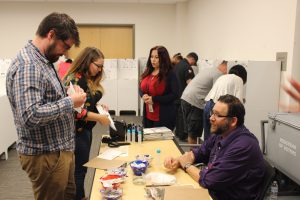 The Registrar of Voters anticipates a record turnout for this past Primary Election Day, with over 1,600,000 people registered to vote in San Diego County.

“We hear mixed feelings, there were some polls where traffic was steady throughout the day, like in the Vista library poll, but in other places like in the South County, there was less transit. It all depends of the contest of each district. A lot of the polls had a lot of voters delivering mail ballots instead of voting at the polls,” said County Registrar of Voters Michael Vu to La Prensa San Diego. “The Register of Voters headquarters had a lot of transit throughout the day. Here we have two lanes, one for people that are already registered to vote, and one for the people that want to register to vote. Voters can also drop their mail ballots here.”

The Primary Elections held this past Tuesday, were the first ever in which a voter could register to vote after the May 21 deadline. It is estimated that up to 2,000 people took advantage of the new law, and registered to vote between May 22 and June 5.

Vu explained that with the new law, United States citizens over 18 years old could register to vote on the Election Day with a provisional ballot.

This type of vote could only be held at the Register of Voters headquarters, where the 261 variations of ballot in San Diego County were concentrated in the five different languages required by federal law.

“The night of the election we can see an idea of the results we are going to get, but it is until 30 days after when the results are certified by our Registrar of Voters,” said Rebecca Lee, spokesperson of the Register of Voters in San Diego County.