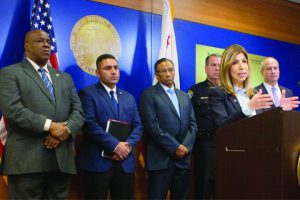 The names of 332 people have been removed from civil gang injunction lists affecting neighborhoods across San Diego County following a careful review by the District Attorney’s Office, which worked to confirm individuals’ lack of recent criminal and gang activity. The civil injunctions were filed several years ago in various cities across the county, often in response to communities seeing a spike in gang-related violence. The injunctions—which have had their critics— were court orders restricting the most active and dangerous gang members from congregating with other known gang members, fighting, carrying weapons, and intimidation.

However, no gang injunctions have been filed by the DA in the past eight years and the oldest existing injunction dates back to 1997. District Attorney Summer Stephan initiated the review of 799 individuals, recognizing the dated nature of most of the injunctions and the potential problems that being on the list pose to individuals who are no longer affiliated with a gang or engaging in criminal activity. When a civil gang injunction is issued against an individual, it remains in effect for a lifetime unless that person applies for removal and meets certain criteria. However, most people don’t know relief maybe available to them or how to go about requesting their name be removed.

“People who are genuinely taking steps to be a lawful, contributing member of our community shouldn’t be punished by a civil court order that might be stopping them from getting a job, connecting with their relatives or moving on with their lives,” DA Stephan said. “We worked closely with our law enforcement partners to identify people who might qualify for removal while at the same time making sure we’re continuing to protect the public from those who still engage in gang-related crimes and activities.”

In total, 42 percent of the individuals listed on 20 civil gang injunction lists affecting 12 gangs have been removed. The District Attorney sent letters in late February informing people their name had been purged from the lists, saying the action is “an effort to pursue justice that fairly reflects your current status as one moving away from the gang life. This should assist you in removing any negative consequences that come from being on an injunction list.” It also notes that if the individual reengages in gang activity they could be added back on the injunction.

“Every law enforcement agency in the county wants individuals to disassociate themselves from the gangs and the activity that landed them on the civil injunctions,” said Escondido Police Chief Craig Carter. ”Police departments across the county are joining the DA in being proactive in removing individuals from these injunctions and we hope other gang members see this as a motivation to end their gang affiliation and become a productive member of their community. We want nothing more than to keep our youth from joining gangs in the first place.”

Pastor Jesus Sandoval, Executive Director of San Diego’s Commission on Gang Prevention and Intervention, praised the collaboration that led to the removal of individuals from the injunctions.

“The Commissioners in our Sub-Committee for gang documentation laid the groundwork for this effort and did an outstanding job working with the DA and Chief of Police in advocating for this audit,” Sandoval said. “The removal of these names is in line with the Commission’s vision is to develop a more strategic, coordinated, and collaborative effort between the City and law enforcement agencies to curtail gang involvement and its negative impact in the City of San Diego.”

The DA also says 66 individuals were removed from injunctions not for lack of gang or criminal activity but because the injunction no longer applied because they were either sentenced to life in prison, deceased or appear to have left the jurisdiction or gang life entirely.