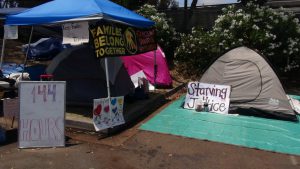 A hunger strike for justice is underway just a few feet away from a Border Patrol station in San Ysidro. Members of the hunger strike say this area is a central location where detainees are brought before they are moved elsewhere.

On a mission to create change, four men and two women are risking their health and facing starvation to create change by not eating. For now, they are only drinking water and teas prepared by medics, replenishing the strikers’ electrolytes with new liquids and also providing vitamins and minerals.

The hunger strikers have several demands, which include abolishing ICE, reunifying families separated at the border, rejection of campaign contributions from private prisons, justice for Earl McNeil, removing for-profit prisons from California, a meeting with state representatives, creating a San Diego committee on police accountability led by black, indigenous, and brown community members, and also a no vote for Supreme Court nominee, Brett Kavanaugh.

Gabby, who is on the hunger strike and preferred using only her first name, spoke on the demand regarding the U.S. Immigration and Customs Enforcement.

“ICE was created in 2003, it’s not as if America has existed with this institution, and the type of injustices that have happened and continue to happen, it’s irreversible. The separated children, for example, according to the U.N., is a form of genocide, and it’s a tactic they are using to deter those trying to seek asylum. It’s immoral, unethical, and it’s wrong. That’s why we’re adamant about the abolishment,” Gabby said.

A recent survey by Morning Consult/Politico shows 54 percent of Americans are opposed to abolishing ICE. This week Vox, an online news site, also reported House Republicans ditched plans to force Democrats to vote on abolishing ICE after it became clear that Democrats as a group would vote against their own bill.

The hunger strikers are also asking for the reunification of families separated at the border. A judge in San Diego recently ordered separated families to be joined back together. So far the government has reunited more than 50 families, but thousands remain separated.

A rejection of campaign contributions from private prisons is also on the group’s list of demands. In 2015 the Washington Post reported the two largest for-profit prison companies in the United States, the GEO Group and Corrections Corporation of America (renamed CoreCivic), and their associates have pumped more than $10 million to candidates since 1989 and have spent nearly $25 million on lobbying efforts.

An analysis from the Associated Press found that detaining immigrant children brings in $1 billion in revenue annually. The AP report also showed that grants to facilities for housing detained unaccompanied and separated children soared from $74.5 million in 2007 to $958 million in 2017.

In the days since the hunger strike began, some changes have occurred on issues in the demands of the strikers.

The California Democratic Party just recently announced it would no longer accept political contributions from private prison corporations. Party Chair Eric Bauman said any contributions received since May 21, 2017, would be donated to organizations doing critical work to protect immigrants from the Trump administration or to support and rehabilitate recently incarcerated folks.

Members of the hunger strike said they are in talks with other elected officials to get them to also stop accepting political contributions from the private prison industrial complex and redistribute money they’ve taken from for-profit organizations and private prisons.

The group is also demanding answers over the death of McNeil.

Gabby said the reason for the demand was over concerns about violence against poor people, people of color, marginalized groups, and she said the recent death of McNeil is one of the latest local examples of that.

McNeil’s family said he went to the National City Police Department last month looking for help, but ended up in a coma and suffered severe brain damage while in custody. Police officers have said McNeil became combative when they met him outside the police station. McNeil died after being taken off life support last month. An investigation is still underway.

Along with the hunger strike, the group has also sent letters with the different demands to elected officials at the local and state level asking them to respond to the demands.

Strikers also set up a campsite at the Vista Terrace Park in San Ysidro where they stay overnight with supporters and the group’s security guards, and they also set up a Facebook page called San Diego #Hungry4Freedom Hunger Strike.

In the first days of the strike, Border Patrol agents attempted to speak with the strikers, but the members were not interested in a dialogue.

The strikers claimed local residents also tore down a banner and another person spewed hate words and told them to leave, but it didn’t discourage anyone from stopping the hunger strike.

Marco Amaral, who is also a teacher, was one of the first to join the hunger strike.

“There is no going back. We have come as a country to a point that is unforgivable. We have arrived at a point as a country, as a society, that we can’t in history repeat. And it’s our social duty, moral duty, to do something.,” Amaral said.

Amaral said he attends all rallies, marches, protests and hardly misses any of them, but found himself feeling frustrated after he would return home and turn on his television and live life as if nothing happened.

“Life goes back to normal. The President continues to do what he wants. The Border Patrol continues to separate families,” Amaral explained. “In that frustration, but also with love for humanity, love for the mothers, for their daughters and sons, that are without their parents, I thought it was important to do one more sacrifice, a sacrifice that goes beyond a few hours of my day. The biggest sacrifice we have as humans is our lives, our bodies. For me, a hunger strike is the most basic thing we can do,” he added.

Amaral said it’s just a beginning, adding the group has already seen accomplishments in the days since they began the hunger strike, including generating awareness in the surrounding neighborhood and with the many people who have stopped by.

He also said the list of demands will serve as a platform, a political agenda for a movement with a clear purpose with a beginning and an end.

Mohamed M. Elnakib is also on the hunger strike.

Elnakib, who works in mental health, was motivated by the trauma he said is evident in the children being reunited with their families. He said there is no expression, no emotion in the faces of the children because they have seen so much trauma they no longer are able to regulate their emotions, and he worries over what damage it will do long term.

“I’m unapologetically Muslim and it’s another one of the main reasons that drives me forward. Putting my life on the line is something my faith teaches me to do, especially when it comes to helping others and making a difference in the world,” Elnakib said.

He was also motivated by the Muslim travel ban because it has affected so many families, and because the Supreme Court upheld it a few weeks ago, he considered staying silent to be like giving approval to allow it to happen.

Gabby hopes the hunger strike will underscore the need for people to come out and speak up.

“In solidarity to the injustices happening every day, people can’t just go home feel bad, and go about their day expecting politicians to fix things. We the people need to demand change,” she explained.