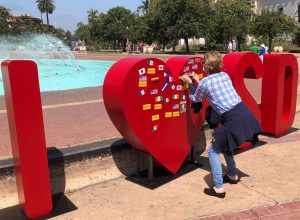 To celebrate immigrant heritage month in San Diego, flag stickers of countries like Mexico, Guatemala, Italy, and France were placed in a heart that was part of a monument that said “I heart SD.”

The monument was exhibited Friday, June 22, at Balboa Park for only one day. On that day, immigrants of different parts of around the world were invited to place a flag sticker of their place of origin in the heart part of the “I heart SD” sign. Some of the flag stickers included personal messages to commemorate their country.

The exhibit opened a few days after several media outlets reported the conditions of children that were separated from their parents after arriving to the United States to ask for asylum. Immigration authorities separated the migrant families as part of the zero tolerance policy established by U.S. president Donald Trump a few months ago.

Faulconer mentioned the event was organized before the revelation of videos, audios and photographs that showed young children in what appeared to be cages in detention centers. So the “I heart SD” sign was not a result of the recent findings.

“This exhibit is running in different cities all over the country to celebrate the cultural diversity of the community. We are all immigrants in this country; this is how it was built. And we want to celebrate all the different cultures on this month, especially in these times,” said Paola Avila of the the San Diego Regional Chamber of Commerce to La Prensa San Diego. “The contributions that the immigrant community does to the economy and this particular city, are very important.”

The exhibit will be permanently placed at the New Americans Museum of Art located in Liberty Station.

“Every year, we celebrate Immigrant Heritage month all over the country, with cities, companies and individuals, and it’s all about celebrating America’s past, present and future”, said Katie Aragon, grassroots communications manager for fwd.us, a political advocate organization that wants a comprehensive immigration reform in the U.S. “This particular event is one of a series of I heart cities, we have them in Houston, Washington, Chicago, Atlanta, and Salt Lake City. We want to lift up the stories and help people remember their one heritage and also welcome newer immigrant communities in the United States.”