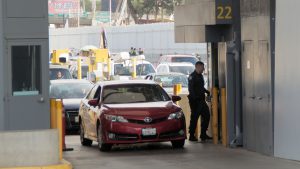 The statement flies in the face of statements made by Mexican Secretary of the Interior Olga Sánchez just over two months ago denying the involvement of Mexican law enforcement in gathering information on 59 journalists, activists, and attorneys.

In a letter issued by CBP after being pressed by a coalition of groups seeking answers on the matter, the agency stated that “a number of journalists and photographers were identified by Mexican Federal Police as possibly assisting migrants in crossing the border illegally.”

According to CBP, Mexican authorities supported this investigation because the caravan that came to Tijuana late last year posed an elevated threat level.

The story of journalists being targeted initially broke a few months back, when two attorneys from non-profit Al Otro Lado were denied access into Mexico because their documents had supposedly been flagged by the United States.

A similar incident took place at almost the same time involving two photojournalists – one from Spain, but working for an American media outlet, the other a Canadian-American – who were denied entry into Mexico because they had been “flagged.”

However, journalists interviewed by La Prensa San Diego during November and December stated that it was not the Federal Police, but rather municipal police “liaison” officers who demanded photographers and journalists show their documents while they were at the border documenting groups of migrants crossing into the U.S.

It was these Tijuana municipal police officers who took pictures with their cellphones to record the journalists’ documents.

Attorneys from legal services non-profit Al Otro Lado have filed several reports of abuse by Tijuana Police against migrants that come to Tijuana to cross the border and petition for asylum.

Mexico’s Federal Police had no immediate response to media inquiries regarding this new version of events issued by CBP.

The National Immigration Institute – the other Mexican agency that works with CBP – had stated earlier under condition of anonymity that it had denied the two journalists and two photographers entry into Mexico based on the fact that their documents had been flagged, but that it did not know the reason for the flag which “they’d have to work out in the U.S.”

Several of the journalists on the “list” said to have spent up to several hours at secondary screenings. All they were told by U.S. was that it was “part of a national security investigation,” without providing any further details.