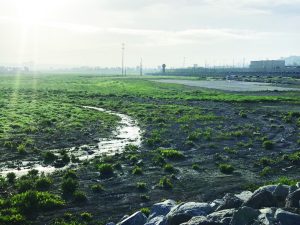 After several pollution studies, legal threats, and several lawsuits by the State of California, the lawsuit against the International Boundary and Water Commission (IBWC) has finally reached San Diego Federal Court.

Several families impacted by beach pollution joined the Mayor of Imperial Beach in court this past Monday, August 13th, anxiously awaiting to hear whether the judge would grant a request to dismiss the case.

After more than an hour into the hearinga, the IBWC defense team argued before the judge that the Commission is not responsible for the different pollutants reaching the coast, because the spills occurred within the natural canyon system and thus they “cannot be responsible because there is a natural flow” coming from Mexico.

The plaintiffs – the City of Imperial Beach, the City of Chula Vista, and the Port of San Diego – argued back that IBWC was required to implement solutions to this public health issues and ensure that these wastes do not reach San Diego beaches.

The issue, said the principal attorney for the plaintiffs, Matt Edling, makes no sense, given the IBWC’s stated mission to provide binational solutions regarding “sanitation, water quality, and flood control in the border region.” “As an attorney, I see that the consequences of this is a violation of the law, so there should be remedy under the law to prevent this contamination so that it does not reach the community and affect us all,” he added. “As a human being, it is simply horrible for this community to have to deal with this,”

Outside the Federal Court, the plaintiffs also stated that the defense’s arguments make it seem like Washington was turning a blind eye to the situation that thousands of San Diego’s coastal residents have endured for years.

The Mayor of Imperial Beach, who was front and center listening to the arguments by both parties, said that justice was coming for everyone who has suffered illness as a result of going to highly-polluted beaches, who has been unable to enjoy the ocean due to beach closures, or who have smelled the foul odors you can perceive in the mornings near the Tijuana border.

“The judge talked about going out in the field and viewing the canyon collectors to evaluate them, and I think that today we can see today that there is justice, because both sides are being heard,” said Imperial Beach Mayo Serge Dedina, “and that was the purpose of this lawsuit, to have a fair chance to have the case heard. So, today the people of Imperial Beach, the people of Chula Vista, and the San Diego community got a day of justice.”

Outside, families asked the U.S. and Mexican governments to roll up their sleeves and address the problem so we do not have any more incidents like the one last week, when IBWC told the City of Imperial Beach that it was them who had to spend more to avoid contamination, and not the federal government.

If the judge agrees with at least some of the plaintiffs’ arguments, both parties will begin gathering evidence and preparing to go to trial.