L.A. Cetto, Mexico’s most prestigious winery, celebrated their 90-year anniversary at their vineyard in Baja’s Valle de Guadalupe this weekend.

The celebration included wine tastings and a concert for over 2,000 guests, a catholic mass to bless the grapevine, a blessing for the start of the milling season, and a grape trodding contest.

“Ninety years is one more year, it is an even number that sounds very nice, and like the new design for the 90 years we made as an infinite symbol it means that the 90-year anniversary is in a way just the beginning in this industry that is thousands of years old, 90 years is still a small number,” said Luis Alberto Cetto, general director of L.A. Cetto. “This is a very special moment and it is really nice to be able to share everything we have done with friends of the wine house, close friends and the public.”

This family business has won over 540 awards in an international level for its wine produced in Baja California in their 90 years of existence.

Just in 2018, L.A. Cetto has won 21 awards at an international level, and also got the recognition from a New York competition, as the “Best of the Nation.”

The award winning wines of this year include Chenin Blanc and Cabernet Sauvignon.

During the celebration, the over 2,000 guests were able to enjoy wine tastings of 22 different L.A. Cetto wine lines like Don Luis, Clasica L.A., and Reservas. The wine tastings included the award-winning Chenin Blanc, Fume Blanc, Chardonnay, among others.

“At the wine tasting we have practically every wine we have available like the line of Sierra Blanca and Nuestra Reserva,” added the head of the family winery. 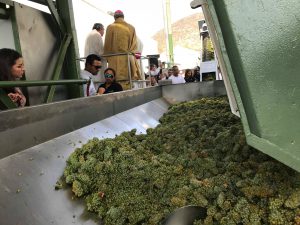 As is tradition, the wine industry of Valle de Guadalupe organizes different events to commemorate the new milling season, and L.A. Cetto’s competition for grape trodding is part of this tradition.

A total of 40 guests participated in the three-minute competition. The activity was designed for partners, one participant tread upon grape inside a half barrel while their partner helped the juice flow.

The first place winner was Clarissa Garcia, who along her 12-year old nephew produced the greatest quantity of grape juice. The second place was for Jaime Tagle, and both winners got a box full of wine bottles from L.A. Cetto.

“This was the first time I participated in this competition and my nephew was the one that signed us up. It was really easy to participate. All I needed to do was to step on grapes to get some juice. We have had a great time here enjoying of some wine and friend time,” said Garcia.

The party guests were transported in buses to a terrace where the celebration continued with a gourmet dinner and more wine tastings.

As part of the celebration, there was a bullfight in the afternoon and a concert at night by famous pop singer
Paulina Rubio, who performed her most famous songs like “Yo no soy esa mujer”, “El último adiós”, “Dame otro tequila”, and “Nada fue un error”.

The night ended with fireworks that illuminated the vineyard, and which also concluded the day that was filled with activities for all the guests.