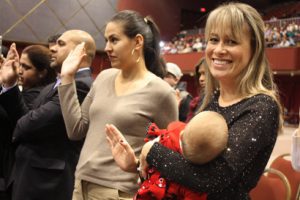 In a loss for the Trump administration, a federal judge ruled two related California lawsuits to remove a question about citizenship in the upcoming U.S. census can continue.

U.S. District Judge Richard Seeborg of the U.S. District Court for the Northern District of California rejected the Trump administration’s requests to dismiss the lawsuits.

Opponents of the citizenship question fear it will discourage undocumented immigrants from filling out the questionnaire and create an inaccurate count.

The decision to ask if residents are U.S. citizens was made in March of this year by the U.S. Department of Commerce Secretary Wilbur Ross, who contends the question is needed to help enforce the Voting Rights Act.

In March of this year, NBC News reported White House Press Secretary Sarah Huckabee Sanders defended the move, and said the question is “necessary for the Department of Justice to protect voters.”

But in the order denying the motion to dismiss the lawsuits the judge wrote, “indeed the operative complaints are replete with examples of government policies and actions and rhetoric within the last year that would tend to make non-citizens and their family members potentially afraid to divulge their household’s citizenship status to a federal agency.”

The judge also wrote “plaintiffs make a sufficient showing that the Secretary’s decision to add a citizenship [question] will undermine the ‘strong constitutional interest in accuracy’ of the census.”

Back in July a federal court also allowed a similar multistate lawsuit filed by the State of New York to move forward.

California Attorney General Xavier Becerra, who filed one of the lawsuits back in March, applauded the judge’s decision.

“Tonight’s ruling grants us discovery to understand the decision-making behind the Administration’s effort to disrupt an accurate Census count and most importantly, for our case to fully move forward,” said Attorney General Becerra. Our communities in California depend on the Census to determine critical services for our schools, disaster relief, public health and safety and we’re encouraged by today’s decision.”

An inaccurate count would have a negative impact on the state and could lead to losing seats in the House of Representatives. The state would also suffer the loss of federal funding allocated on the basis of census-derived statistics.

The census is required by the constitution every 10 years. All residents are to be counted regardless of citizenship status. The last time a citizenship question was asked was in 1950.

Reuters reported there is support for the citizenship question among conservative scholars at the Heritage Foundation and American Enterprise Institute, Republican U.S. Representatives Steve King and Clay Higgins, and Republican Senator John Kennedy.

The Reuters report also found the National Academies of Sciences, Engineering, and Medicine’s Committee on National Statistics’ Task Force on the 2020 Census said in a letter to the Department of Commerce that the question was “inconsistent with the ‘proper performance of the functions’ of the Census Bureau,” and should be removed.

Hundreds of civil rights groups and Democratic politicians have also expressed opposition to the citizenship question in the upcoming census.

“Let’s call this like it is: The census, written about and hallowed in the Constitution, is being distorted by this administration for political purposes. President Trump and Commerce Secretary Wilbur Ross should be ashamed of themselves,” Senate Minority Leader Democrat Chuck Schumer said in a statement. “Hopefully, the courts will correct this glaring abuse.”

The Mexican American Legal Defense and Education Fund (MALDEF) is among the civil rights groups opposed to the citizenship question, and also submitted a letter to the Department of Commerce explaining their opposition.

The letter states, “immigrants from Mexico, Central America, South America, and the Caribbean make up a majority of the immigrants in the US. In addition, the majority of the undocumented population in the US are Mexican. Any collection of information that facilitates an undercount of the immigrant population in the U.S. will have a particularly acute impact on the Latino population living in the U.S.”