Lawsuit to Stop the Separation of Parents and Children Moves On 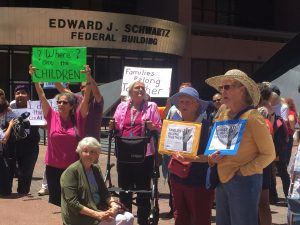 A judge approved the advancement of a lawsuit filed in San Diego by the American Civil Liberties Union this week challenging the Trump administration’s policy to separate parents from their children who are caught trying to enter the United States.

On Wednesday, U.S. District Judge Dana Sabraw denied a motion by the Trump administration to dismiss the lawsuit.

In his ruling, Judge Sabraw called the separation of parents and children brutal and offensive.

“At a minimum, the facts alleged are sufficient to show the government conduct at issue ‘shocks the conscience’ and violates Plaintiffs’ constitutional right to family integrity,” the judge said.

The Trump administration meanwhile contends the separation of families is needed to prosecute those who attempt to enter the country without legal documentation.

The original lawsuit was filed back in February of this year, on behalf of asylum seekers who had their children taken from them. It applies to migrants who come as political refugees and also those who seek asylum after they are apprehended at the border.

Bardis Vakili, senior staff attorney with the ACLU in San Diego, explained the significance of the ruling.

“Asking the United States to protect your children from persecution and torture is not a crime, but a protected legal act. In denying the United States motion to dismiss the case, the judge stated what is obvious to everyone except our own government: that the forcible separation of asylum-seeking parents and their traumatized children is a ‘brutal’ act, comparable to the very persecution these parents hoped to protect their children from in the first place,” Vakili said. “The ruling allows our lawsuit to go forward and gives us the opportunity to prove the government is indeed engaging in these horrific tactics. With scores of children crying themselves to sleep alone every night in government custody, we hope to be able bring an end to their nightmare soon.”

Last week, dozens turned out for a rally at the entrance of the downtown U.S. Immigration and Customs Enforcement office to demand an end to family separation.

The rally follows a visit to San Diego from U.S. Attorney General Jeff Sessions, where he said those caught crossing into the U.S. illegally would be prosecuted, leading to the separation of parents and their children.

The rally was part of a national effort organized by the ACLU, where thousands were expected to participate in similar events across the country.

The American Friends Service Committee, and Indivisible were among the organizations that participated in the rally.

Suzanne Metheny, a resident of Encinitas, explained her motivation for attending the rally.

“I think it’s important that we don’t let the moment slip away, and that we acknowledge how atrocious it is that these children are being snatched from their parents, how heartbreaking it would feel to anybody. It’s just the wrong thing to do,” Metheny said.