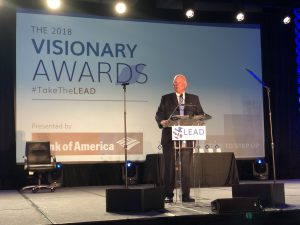 To celebrate leadership, giving back, and those who are making a difference, LEAD San Diego celebrated their 16th annual Visionary Awards, on Thursday, June 14.

Nearly 800 business, community, and elected leaders gathered for the organization’s annual Visionary Awards, Southern California’s premier leadership recognition event. The event celebrated the work of six individuals who are stepping up in the community and whose efforts are moving the region forward. The event theme, Time to Step Up, speaks to the need in our community and country for leaders who are informed, engaged, and empowered to take on the issues that matter. LEAD believes that when empowered with the right tools, great leaders step up willingly. That is the opportunity the organization seeks to provide through its programs.

For 36 years, San Diego Regional Chamber of Commerce affiliate, LEAD San Diego has been cultivating the region’s most effective leaders, providing them with the knowledge, tools, and network to make meaningful change.

“The Visionary Awards gives us a chance to celebrate all the leaders that are coming up in the community, and to also celebrate leaders who have been here sometime,” said San Diego Regional Chamber of Commerce President and CEO, Jerry Sanders to La Prensa San Diego. “LEAD San Diego affiliated to the chamber since last September, it just seemed to be a good match. We have leadership programs, and they have leadership programs, and we have staff and a lot of the areas that complement that. So we decided to join forces and become one organization.”

“It’s an honor to receive this award and I’m really happy to be here,” said Uribe Diaz, who is the current Vice President of Club de Beisbol Toros de Tijuana. “For me leadership is that from my spot at Club de Beisbol Toros de Tijuana, I’m able to promote all the positive features about Tijuana and that people should no be afraid to explore everything in Tijuana from cuisine to entertainment and sports.”