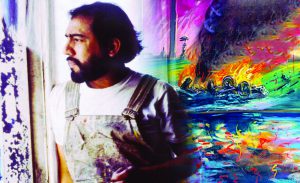 Fire illuminates a new documentary about a major American painter and a revered leader of the Chicano Art Movement, which was recently screened at the San Diego Latino Film Festival.

“Carlos Almaraz: Playing with Fire” explores the life and impact of creative force Carlos Almaraz, who was born in Mexico City, raised in Chicago and East Los Angeles, and who became an influential muralist and painter.

Almaraz identified with the Chicano movement and co-founded the Chicano artists collective known as Los Four along with other celebrated artists, and he worked with Luis Valdez’s Teatro Campesino painting murals to help advance the Chicano civil rights struggle.

Archival interviews of Huerta and Chávez speaking about Almaraz are among several interviews showing the impact and intersections of the life and work of the artist.

The film includes actual footage of Almaraz explaining his artistic motivations while standing in front of a large canvas of a burrito stand, allowing audiences to get a close and personal view of the artist.

It also goes beyond presenting a brilliant person by also showing a complex life through the use of a wide range of ephemera, from his explorations through sexuality, to a struggling New York artist who faced breakdowns, battles with alcoholism, and the death of his brother Ricky, overcoming those challenges, but ultimately his life was lost to AIDS in the late 1980’s.

Part of the draw to Almaraz is his independent spirit, seen throughout the documentary with different personal decisions he made, including leaving his life as a muralist to pursue his dream of becoming a studio-based painter.

His work was considered to be personal, passionate, seductive and dreamlike. He used textures, splashes and brilliant colors to form abstract explosions. The paintings focused on the Los Angeles urban landscape, his Latinx heritage, human plight, himself, his family and also explorations of his bisexuality.

Almaraz was famous for his depictions of Echo Park, fires and freeway car crashes. He’s been compared to other artistic giants, including Marc Chagall, Claude Monet, and Diego Rivera.

His paintings are a focal point in the documentary. They come to life throughout the film and at times it can feel as if one is inside them.

Adding to the film is an all-star cast that reads passages from numerous journals Almaraz kept throughout his lifetime.

His impact is also felt in the pride shown by appreciations from celebrities such as actor Edward James Olmos and comedian Cheech Marin, among many others in the film.

Music also contributes to the film, from the sounds of the piano to the inclusion of Los Lobos’ Louie Perez who contributes the original score and even music from the Mexican alternative rock band Café Tacuba.

Not enough attention has been paid to Chicano artists especially on the big screen, and films made from the point of view of people from diverse ethnic backgrounds are still lacking, but this film offers two Latinx directors.

One of them is Elsa Flores Almaraz, an acclaimed artist, activist, painter, muralist, musician and Almaraz’s widow.

“There are not too many Latina filmmakers out there, but we have tremendous optimism this is slowly changing,” said Richard Montoya, co-director of the film.

He first heard of Almaraz as a “teatro kid” in the mid 1980’s while acting with the El Teatro Campesino theater company. He remembers Almaraz once said more humor was needed in their work.

“We owe a measure of thanks to Carlos and a few others who used satire and humor in the face of tough times and calamity,” Montoya said.

The documentary comes a little over a year after the Los Angeles County Museum of Art (LACMA), a major American museum in a region with a large Latinx population, exhibited the first large-scale retrospective of the work of Almaraz, catching up to his notoriety decades after his death. Some of this effort is due in part to the clout and power of renowned art collector and comedian Cheech Marin, who pushed for the exhibit.

It also comes during politically divided times in the country as anti-immigrant and anti-Mexican sentiment is common and as minorities continue to make gains and grow in their demands for more cultural relevance.

Almaraz was well known to activists, artists, celebrities, and intellectuals, but with the documentary the masses are presented new opportunities for inspiration and an even greater one for Latinx to see themselves and imagine new possibilities.

Montoya said Almaraz was too important of an artist not to have a living film dedicated to him. He also said that an announcement is coming soon with more release dates to see the film. Check https://www.facebook.com/CarlosAlmarazArt/ for more information.

“Carlos was a true DREAMER. I feel this documentary will speak to Dreamers of every stripe. The man elevated Chicano art and then moved on to his more personal work. That is a classic story and a hero’s journey. We have a sort of Valentine card to our movement, but in the end something much more personal. A true act of love,” Montoya also said.