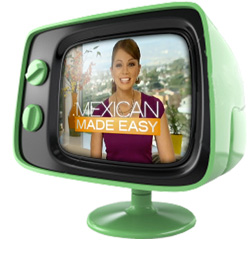 “Somebody should tell the U.S. public Mexico does not have yellow cheese in its kitchens” says Chef Marcela Valladolid right before breaking into contagious laughter. This is the motivation behind her upcoming cooking shows “Mexican Made Easy,” premiering in Food Network on Saturday January 23rd at 9:30 in the morning.

“My intention is to have the rest of the US public learn what we know so well here in the border: Mexican food is far more than burritos and nachos that are simply fast food snacks” she adds, “we have an array of dishes deeply rooted in our history and tradition and I want to show that. I mean, what can be healthier and tastier than ceviche?”

The new show will hope to catch the networks viewers, already passionate about good food, and it comes at a time where Mexican flavors have hit main stream US public, to whom Marcela hopes to teach fast and easy recipes of truly Mexican Cuisine.

Barely on her early 30s, Marcela is a true border child; born in San Diego raised in Tijuana, she attended the Culinary Institute in LA and Ritz Escoffier in Paris, yet she has a deep love for the taste of the Peninsula and is proud to belong to a culinary movement in the region.

“El Baja-Mediterráneo movement is something I’m very proud of… there is no sauce, salsa or recipe that can beat the taste of a Puerto Nuevo Lobster, served with butter, beans and freshly made flour tortillas. That is the best taste there is.”

Besides being an editor for Bon Appétit magazine Marcela is currently the face for Knorr, Helmans, Lipton and Ragú for the Hispanic market in the US and manages her own catering company in Tijuana. 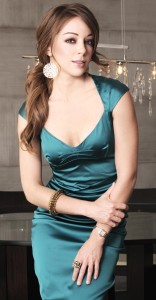 “I work like crazy and I’m a single mom of a 5 year old kid, I’m not going to spend 3 hours cooking” she explains, “yet I feel this longing to eat the way I used to as a child; tostadas mollets, mole, such flavors give me pleasure and take me back and I had to find a way to blend them into my busy lifestyle”.

Marcela remembers she was only 19 years old when she  sent a demo video tape hoping to work with Food Network. It’s been 12 years and since then, and her passion for food has taken her far already, she had her own TV Show at Discovery, called “Relatos con Sabor” (Flavor Tales), she became one of the favorite contestants of Martha Stewarts The Apprentice and her first cook book “Fresh Mexico”, was released simultaneously launched both in English and Spanish August 2009.

“The book contains a hundred recipes and it is definitely the influence behind my new show; a search for fresh, authentic and easy recipes with accessible ingredients you don’t have to get a specialty Mexican market” she explains.

In her first for episodes, “Chef Marcela” —as she calls herself in her webpage—, will teach her public how to prepare a Mexican brunch with mole chilaquiles, benedict eggs with chipotle sauce and Mexican coffee; a special futbol game menu with guacamole and chile-chicken wings gulped down with michelada flavored beers. For Valentine’s Day, she is going to prepare “cuddle food” and she will then prepare the emblematic fish tacos with drunken sauce.