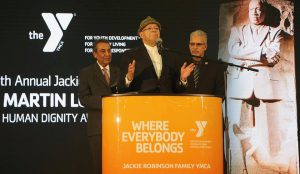 The Jackie Robinson YMCA in San Diego holds an annual Martin Luther King, Jr. breakfast to honor King’s legacy and to bestow its annual Human Dignity Award on someone that has made an impact on the lives of people in our local community in the spirit of Dr. King’s vision and character.

Last Friday, the annual breakfast was held for the 34th time, and drew 1,500 people that included elected officials, civic leaders, and several past recipients of the Human Dignity Award. This year, for the first time, the award was given to an organization, not an individual.

The recipient was the Tariq Khamisa Foundation, a San Diego-based non-profit that delivers a powerful message of non-violence and gang prevention to local school students.

Although the aim of the program is very important, the genesis of the group is the most powerful message it conveys.

Tariq Khamisa was a 20-year old San Diego State student that was murdered in 1995 when he was confronted by a 14-year old teenager trying to impress his gang leaders. The gang had called for a pizza delivery and Khamisa happened to the driver that fateful night.

When Khamisa refused to give up his pizzas, Tony Hicks shot and killed him in cold blood.

Hicks was charged as an adult and pled guilty to avoid a lengthy trial. The case drew national attention because Hicks was the first juvenile to be tried as an adult under a law that had taken effect on January 1, 2015, just 21 days before the shooting.

Hicks was sentenced to 25 years to life in prison when he was 15 years old and was sent to a California Youth prison, but the next year, he was moved to Folsom Prison, one of the state’s most dangerous adult facilities.

After the shooting, Tariq’s father, Azim Khamisa, reached out to Hicks and his grandfather, Ples Felix, who had been raising Hicks.

The older Khamisa forgave Hicks and began a friendship with Felix as they had both lost their sons; one to violence and one to prison.

Together, the two men founded the Foundation in hopes of reaching students before they too engaged in violent behavior. 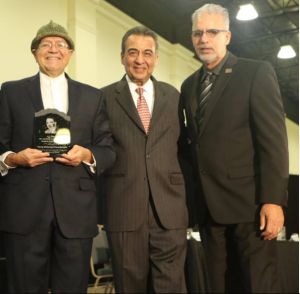 Mr. Khamisa began speaking to school students and recounting the story of his slain son, and delivering a message of forgiveness, non-violence, and restorative justice. Mr. Felix often joined him on stage to detail how his grandson’s actions devastated both families. It was a powerful presentation that always left an impact on students and teachers alike.

Over the past two decades, the Foundation has reached over 500,000 students through its presentations, workshops, and peace clubs at schools.

Mr. Khamisa as become a world-renown speaker and author, and has received several prestigious awards for work that he never imagined he would end up doing.

During the years the Foundation has been delivering its important message, Tony Hicks has continued to serve his prison sentence, surrounded by some of the state’s most violence criminals. Hicks has grown up in prison, having missed all of life’s milestone usually enjoyed by teenagers, young adults, and young men.

For the past few years, Hicks has been part of the Foundation and has written a blog to answer questions directly from students that have participated in the program. Hicks has been a powerful messenger with a unique perspective.

Now 38 years old, Hicks was eligible for parole for the first time in November. In support of his parole were Azim Khamisa, his daughter Tasreen, and Ples Felix. Also in support, in a unusual gesture, was San Diego County District Attorney Summer Stephen.

After a two hour hearing and one hour of deliberations, the Parole Board granted Hicks his freedom after 24 years in prison. New Governor Gavin Newsom has an opportunity to review the parole decision, and could either approve, deny, or modify it.

If Hicks is released, the Foundation expects to have him deliver his story to more students, giving them a first-hand account of the true impacts of violence and forgiveness.

The tragic events of January 21, 2015 are not unlike thousands of other violence crimes that ended lives and changed many others.

As Mr. Khamisa often says, “there were victims at both ends of the gun.”

But, unlike other tragedies, this case resulted in the formation of a foundation that has made a difference in the lives of many others. It would have been a missed opportunity to privately grieve and resent the shooter, but not take action to help prevent other families from experiencing the same pain they have.

Azim Khamisa and his family, and Ples Felix and his family, have help change the world by sharing their story to teach others a better way forward. Their selfless work in service of others is an example of strength and conviction seldom seen.

Honoring the Tariq Khamisa Foundation for its work is much-deserved, but awards are not its goal: ending the cycle of violence in a violent world is.

The Jackie Robinson YMCA has a long history of supporting and honoring great civic work, and this year’s decision to recognize the Tariq Khamisa Foundation is a fitting tribute to Dr. Martin Luther King, Jr.’s legacy.

Congratulations to the founders, sponsors, Board of Directors, staff, and supporters of TKF for the important work they do.

We hope their work continues to positively impact the lives of many more young people in search of a more peaceful and just world.