The leader of the San Diego Republican Party appeared in a video in the 1990s with pictures of Adolf Hitler and Nazi salutes, but he now refuses to comment on why he appeared in the video with two other young men.

Tony Krvaric, the Chairman of the San Diego County Republican Party, appears in a homemade video that resurfaced in recent weeks. During the entire 2 minute 33 second video, an animated picture of Adolf Hitler strikes a Nazi salute with Hitler wearing the customary Swastika band on his right arm.

Krvaric, wearing dark sunglasses, goofs around with the other two young men, and in one picture, both Krvaric and another of the young men are flashing a Nazi salute over the caption, “Yeah, Fairlight Strikes Again!

One of the other young men appears in a picture has a black swastika painted under his chin.

In another picture, Krvaric appears with dark glasses over the caption, “Kill a Commie, coz here’s Strider!”, Krvaric’s acknowledged nickname in the group.

The video was made by a group called Fairlight, based in Sweden where Krvaric grew up. Krvaric has previous acknowledge that he was the leader of Fairlight in the 1980s.

Fairlight was among several groups that were targeted by the US Department of Justice under President George W. Bush and investigators from 10 other countries. Raids and seizures eventually led to the arrest and conviction of several people for computer piracy in schemes to copy and distribute illegal versions of software, games, movies, and music. Krvaric was not among those arrested.

Tony Krvaric, 49, was born in Sweden and immigrated to the U.S. sometime in the early 1990s before becoming a US citizen in 2003.  He has served as the leader of the San Diego Republican party since 2007. In January, Krvaric announce he would not seek another term at the head of the GOP. 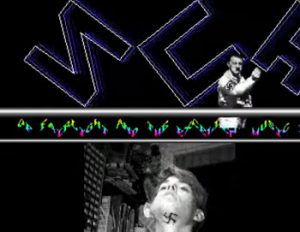 Krvaric has not released any public statements since the release of the video. Only three local Republican elected officials have made public comments but none of them directly criticized Krvaric.

According to KBPS, San Diego County Supervisor Dianne Jacob told KPBS that she’s had “several concerns with Mr. Krvaric’s leadership of the local Republican party and his troubling background has been highlighted in the past, but I wasn’t aware of this disturbing video”, former Congressman Darrell Issa said that the “video was inappropriate, just plain wrong then and now and Mr. Krvaric has to explain why it doesn’t represent who he is today”, and San Diego Mayor Kevin Faulconer’s office released a statement that the “images and messages displayed in the video were wrong then and are wrong today and should never be tolerated”, but all fell short of calling for Krvaric to comment or for his resignation.