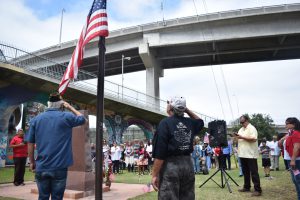 Veterans, local residents and relatives of servicemen from the Logan Heights area gathered on the East end of Chicano Park to honor those who served but did not return home.

As part of the numerous Memorial Day observances held throughout the United States, the Logan Heights Veteran Memorial at Chicano Park became the site where many gathered to pay their respects to the fallen servicemen who called the Logan Heights area home.

After the Pledge of Allegiance and the national anthem, Tony Milan lead the ceremony in a prayer calling for those present to not forget their fallen.

“Honor their memory, remember that freedom is not free,” Milan said. “Know their names and with the passing of generations may we never forget what they have done.”

Marine Master Gunnery Sergeant Ishmael Castillo delivered a keynote address in which he called for remembrance.

“We are remembering, reflecting on our loved ones, of those past and present, family members whom we know and served with, brothers and sisters that never came home,” Castillo opened.

In his address, Castillo also cited one of John F. Kennedy’s most famous lines and called for everyone to do their part to help the U.S., regardless of military status or profession.

“JFK, the 35th president of the United States, said ‘ask not what your country can do for you, ask what you can do for your country,’ what those words mean to me may mean something different,” he said. “But it doesn’t matter what you do as a laborer, as a city council member, as a plumber, as a teacher, a carpenter, it doesn’t matter what you do as long as you do it for your nation.”

This Memorial Day also marked the monument’s fifth anniversary since its dedication to the fallen hailing from Logan Heights.

“I cannot believe that it has been five years since we were here for the dedication of the Logan Heights Veterans Memorial to give praise and glory to our brothers and sisters from the Logan heights community who faithfully served our country,” said Messina.