Lucha Libre, an Expression of Identity 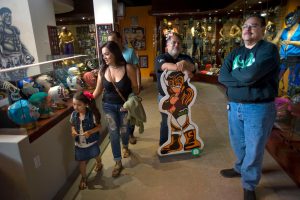 Lucha Libre, the Mexican tradition of professional wrestling, is among the most deeply rooted expressions of urban popular culture in Mexico, where real-life heroes fight against the unknown and overcome the obstacles they face.

It is a sports-entertainment spectacle that was born in the 19th century, but that reemerged in the 1950s with fabulous characters like El Santo and Blue Demon, endowed with great physical strength but also values, presenting themselves as participants in a battle between good and evil.

The Rojano García brothers, Jose Luis, Mauricio, and Diego, grew up captivated by the world of Lucha Libre. When they emigrated from Mexico to the United States, they decided to pay homage to these colorful superheroes and opened a taqueria: Lucha Libre Taco Shop.

“We wanted to take something from Mexican culture that wasn’t so well known in the United States,” said José Rojano, co-owner of Lucha Libre Taco Shop. “We didn’t have the Avengers when we were kids, but we had wrestlers like El Santo and Blue Demon.”

Since 2008 they have delighted customers with tacos and burritos. The menu includes items named after wrestling moves, such as Tap-out Taco, Smackdown Quesadilla, and Knockout French Fries.

As a kind of altar, the Rojano García brothers decided to cover every inch of the restaurant with articles and objects related to sports: bright masks, photographs of famous wrestlers and even a real wrestling ring. Classic wrestling films are projected on the wall all the time.

But it is also an oasis for wrestlers who go to the taqueria, as they have special treatment. They are invited to the Champs Booth, where the champions eat. Customers who wear a wrestler’s mask get a 15 percent discount.

Professional wrestlers, including those from the WWE, are regular customers, who come in wearing their masks, as they cannot show their faces to the fans.

Their success has been so great that they currently have five branches: Mission Hills, North Park, Carlsbad, Sycuan Casino and Petco Park, during San Diego Padres games.

“I like to see how wrestling fans come to the restaurant with their children, not only to eat, but to watch movies and pictures, clearly the taste for wrestling is passed on from generation to generation,” Rojano concluded.

South of the border, in Tijuana, we find the Lucha Libre Museum, a three-story building on Calle Septima, a few feet from famous Avenida Revolucion.

The place is run by Mauricio Limón Pino, a fan of Lucha Libre for more than 45 years . Since childhood, he cultivated a love for the sport.

“I started because an uncle took me to a wrestling match, and after that I became in love with wrestling, in the first show I saw, they tore off the mask from Audaz and threw it to the fans, it was something that had a real impact on me and I never forgot”, recalled Limón.

This is how he began to collect superhero action figures, belts, trophies of wrestlers and kept them in a closet. As the collection grew, he had to consider the possibility of creating a specific site to house and display the pieces in an orderly manner. 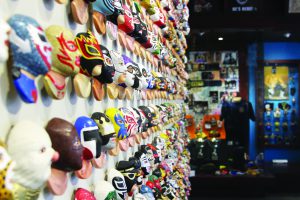 Almost 20,000 objects are displayed in the museum, of which 6,800 of them are related to wrestling. There are even masks behind the showcases that were used in some battles by wrestlers like Mil Mascaras or Rey Misterio, impeccably well preserved.

All the pieces are original: magazines, signs, posters, commemorative dolls, belts, trophies, chairs from Arena Mexico and a myriad of objects that make up the collection. There is even a wrestling ring where children and adults can take their pictures.

“You are going to see things that you didn’t even imagine were there”, said Limón. “I have very strange objects, not only masks, I have mugs, albums, wooden dolls, and almost everything is handcrafted in Mexico, since wrestling has given a job and sustenance to many people in this country”.

The museography was carried out in a first stage by Alejandro Loyo and later by Limón himself, with the intention of spreading the roots of wrestling in Tijuana, fostering among young people the passion for this sport, as well as a knowledge of the wrestlers they consider to be more prominent.

It is the only museum of its kind and the first specialized in wrestling in Mexico. Among the periodic activities are presentations, conferences and exhibitions about the sport.

“A passion for wrestling on the border has grown”, said Limón. “Especially since Rey Mysterio Jr. arrived to the WWE, thereafter more people approached the sport”.

Rey Misterio is considered the best active Mexican-American wrestler in the world, and currently works in the United States professionally.

The Lucha Libre Museum is a highly recommended site, where time stops in the showcases, which will surely transport you to your childhood. “He who comes will never be bored”, said Limon. “As long as wrestling continues, the museum must go on”.