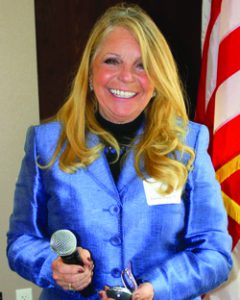 For over 25 years, Marisa B. Ugarte has been involved in the struggle to find an escape for victims of human trafficking, people whom she considers the most vulnerable in our border region.

“Human trafficking is modern-day slavery and it is not just women who are the victims, there are also men and children involved,” said Ugarte. “The biggest problem is understanding that human trafficking isn’t limited to sex work, but also there is also hard labor, domestic services, restaurant work, massage parlors work, and construction work.”

Ugarte serves as the executive director of the Bilateral Safety Corridor Coalition (BSCC), a nonprofit organization which she established to prevent and eradicate human trafficking through intervention and support for victims of this practice.

BSCC began operating in 1997 as a team of volunteers and officially incorporated as a nonprofit in 2002. Since then, this human aid organization carries out the mission of advancing toward a world where there is no exploitation and where the lives of women, men, and children are protected and held in high esteem.

“We in BSCC want people be free from victimization. We seek to have a transition model and we even take a step further to seek the reintegration into society of these survivors of trafficking,” Ugarte said.

Despite founding BSCC in 1997, Ugarte had worked with people in precarious situations and victims of crimes such as domestic violence years before.

Shortly after arriving in Tijuana from her native Mexico City, Ugarte began working in the Tijuana sector of Mexico’s Integral System of Family Development (DIF, in Spanish) as an internal consultant.

“We created several programs within DIF,” said Ugarte. “We started a program for unaccompanied children traveling to the border, founded programs for street children, founded the Domestic Violence Home Line, which still operates 24 hours a day, where someone can call if they are in danger.”

After working in Tijuana’s DIF sector, Ugarte moved north of the border and began to work in northern San Diego County.

“I was offered a position with The Eye Crisis and Counseling Center in Escondido managing crisis intervention,” Ugarte recalled. “I was given the management of minors. Then, I started my own organization because The Eye Crisis and Counseling Center closed down.”
Since then, Ugarte has led BSCC and has faced the challenges that an organization of this type comes across.

Through case management, outreach to the community, emergency housing, transitional housing for victims readapting to regular life, and a hotline to report trafficking, BSCC works nonstop to reduce trafficking and the suffering of those who fall into exploitation networks.

Despite offering this wide range of services, creating new alliances to provide more services to the community through BSCC is a task which Ugarte sees as vital for the organization and victims of trafficking.

“We are creating partnerships with libraries since you can find minors there who may be in a vulnerable situation,” Ugarte said. “We also want to expand our assistance to victims of hate crimes because they can find themselves in lack of help at times.”

“The most ambitious project is to create more emergency and transitional homes. We have a great partnership with the police to rescue the victims, but space is insufficient and it is always necessary to seek more room for those who need help getting out of this cycle of exploitation,” Ugarte continued.

A challenge that threatens the existence of this organization is insecure funds for its operations. As a nonprofit organization, BSCC needs the support of government agencies and the community to continue the fight against trafficking and to support those who have been victims of these practices.

“It is important that the public helps us; monetary donations can be tax deductible and we also need vouchers or gift cards for discount supermarkets such as Food 4 Less or Grocery Outlet,” Ugarte said. “The most needed clothes are not sweaters or shirts; our victims sometimes do not even have their own underwear. With a $25 Target gift donation, victims can buy two changes of undergarments.”

Ugarte’s work has improved the quality of life of hundreds of people. However her and BSCC’s struggle against human trafficking is never-ending, it simply cannot stop she says.

“We have helped around 800 people since 2005, but this issue is not going to go away and can only get worse,” said Ugarte. “If we do not take the problem of sexual exploitation and related crimes seriously then we are losing time, and many may lose their lives.”