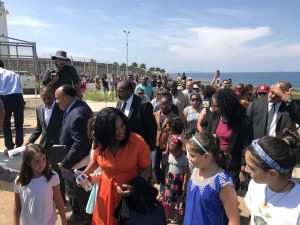 Martin Luther King III, son of legendary civil rights activist Martin Luther King Jr., walked along the wall which divides California from Mexico along with his family and dozens of children and community members.

Upon arriving at Border Field State Park, Martin Luther King III, his daughter by his side, delivered a message of disdain for the separation of families by the U.S. government and the inhumane treatment of those seeking asylum in this country.

“We are very honored to have Mr. King at the border, particularly to commemorate the anniversary of the ‘I have a Dream’ speech; a speech that frames the values this country should have: of acceptance, of showing compassion, and being kind to our neighbors,” said Hiram Soto of local social justice organization Alliance San Diego.

King III began his speech by saying he was honored to visit the border region.

“I wanted to see the border and meet in solidarity with some of the families and organizations that make a difference every day, to get to know the testimony of their commitment to human dignity.” The son of King Jr. also rejected the “unfair treatment of immigrant men, women and children,” and called on the nation to “rise up and live out” the true meaning of his father’s Dream that every person must be treated with dignity and respect.

During the event, King III and his daughter, Yolanda Renee, listened as local activists spoke out against the use of guns and the militarization of the Border.

Andrea Guerrero, Executive Director of Alliance San Diego, stated that the number of federal border agents has grown to the point where now they outnumber San Diego city police, a reminder, she said, that we are not free.

“We are bound to policies driven by fear and hate that have led border agents to cage children, deport parents, brutalize immigrants, and denigrate the humanity of people at and near the border,” added Andrea Guerrero.
Several organizations and a large number of people came to support the event, which sought to humanize the immigrant community. The speech, they said, brought a wave of encouragement and hope for other communities, and had faith that the visit by the Reverend’s son would let the whole world know that the President’s viewpoint was not shared by all Americans.

“We are living in a pretty devastating political climate. Seeing the suffering of separated children is very alarming, and we know that today’s message is going to give us a lot of strength as a community and a nation to move forward,” said Marely Ramírez, of the immigrant rights group Families Belong Together.

August 28 marked the 55th anniversary of the “I have a dream” speech. On that day, California Senate President Pro Tempore Toni G. Atkins recognized Martin Luther King III’s visit to Border Field State Park as an effort to build more bridges and inspire people in California and beyond to treat each other with dignity and respect.

After walking along the border wall and delivering his speech, King III walked up to the wall to talk to some of the families on the other side of the wall and give them a message of a unity that can transcend the walls that exist throughout the world.