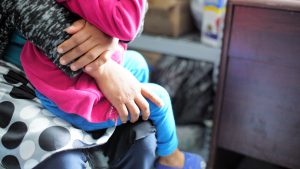 Erendira was walking home from school the day she was raped. That afternoon, in the mountains of Guerrero, Mexico, she was on her way to start her homework when a stranger in a ski mask attacked and forced himself upon her while witnesses watched, but did nothing to stop it.

The harassment, however, did not go away after that, so her mother decided to take Erendira and 4 younger siblings and run. Two months later, a doctor confirmed that she was pregnant.

“They’re twins,” Erendira told La Prensa San Diego in the presence of her mother and with her permission. “One is a boy, and we don’t know about the other one, because you can’t make it out in the ultrasound.”

Erendira’s father abandoned the family several years ago, explains Erendira’s mother Lucia, who is 32. He left her with five young children for a younger woman, and they never heard from him again.

Being the eldest, Erendira had to help her mother provide for the family. They both worked in the mountains as agricultural field workers. They offered their services either per day, per crop, or per week, but Lucia says work was far from steady.

So, when harassment against Erendira got worse, Lucia decided they had to leave their home. If she let her children grow up there, she had no doubt criminal groups would recruit them by force.

“Things have always been ugly there. My dad was killed while being robbed when I was 13,” remembers Lucia. Violence is “something I don’t think will ever change.”

With people coming after her family. Lucia thought their best bet was to try to make it to the United States for asylum.

Under cover of night, they sneaked out of their house, fearful they’d be discovered and face reprisals. They brought only the bare essentials. Their most valuable possession was the birth certificates for all six members of the family.

The family is a member of the indigenous Mixtec community. They lived in the state of Guerrero, near the state border with Oaxaca, where her community is originally from. They speak Spanish clearly, but their knowledge of the language is limited and, having no money, they made their way by whatever means they could, mostly hitchhiking, until they reached Tijuana last week.

Their journey to Tijuana took weeks, and when they finally arrived they were told to go to El Chaparral – the Mexico side of the San Ysidro Port of entry – and ask where they could enter their names into “the book”: a logbook where migrants can be added to the waitlist for being admitted into the PedWest pedestrian facility to petition for asylum.

With no money, and knowing they would have to be there early in the morning, the family made their way to El Chaparral the night before and slept there so they could be added to the list the next morning. After that, however, they had nowhere to go and nothing to do in a strange city.

I was almost dark once again when a Mexican migrant noticed a family was still sitting there while everyone else had left. He then called the Agape shelter, where he had found a place to stay, and was told to bring the family in.

That week marked the first time in a long while that Lucia, Erendira, and her siblings – 14, 12, 9, 5, and 2 years old – had a roof over their head food and a place to clean up on their journey.

Erendira (not her real name) says she plans to have her babies. Her mother is not against it, but does not want her, or any of them, to go back to the mountains of Guerrero for any reason. “Thing is, they’re killing a lot of people over there, it’s an everyday thing, even though there aren’t a lot of people there,” says Lucia.

This Tuesday, Erendira finally had the opportunity to talk to a psychologist about everything she has gone through. Her services were provided through the Baja California Human rights Commission to set legal precedent and help the family. The psychologist also spoke to Lucia.

Human Rights Commission staff then took Erendira and her mother to the State Attorney General’s Office, so they could for the first time officially report what took place in the Guerrero mountains back in January.

The crime report could be used by the United States in their decision to grant them asylum.

If they do make it across the border; i.e., if the family is admitted into the U.S., they still don’t have a clear idea of what they would be able to achieve. “I would go work in the fields, that’s what I know how to do,” says Lucia, who definitely does not want her children to work in the fields. She wants them to get an education.

“I will continue to help my mother. We’re going to have a lot to do once the babies come,” shares Erendira, but she wants her younger siblings to “go to school, to study. Maybe one of them can even go to college.”

According to the Kino Border Initiative, an organization that provides aid to immigrants in the U.S., even though the violence that Mexican families flee from is no different than the one that forces Central American families to leave their homes, Mexican families have less success in having their asylum petitions granted.

Out of the approximately 10,900 Mexican nationals who petitioned the U.S. for asylum last year, only 13% at most had their petitions granted, says the organization.

The number is low because the legal framework used by the U.S. to grant asylum – the 1951 Refugee Convention – defines “refugees” as people with a well-founded fear of being persecuted for reasons of race, religion, nationality, membership of a particular social group or political opinion, but not those who are victims of violence, even when the threat is continuous.