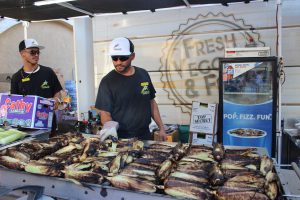 Fried food and kettle corn are some of the food staples at the San Diego County Fair, but can also enjoy a typical Mexican snack that’s starting to trend: Mexican-style corn cups.

A few yards from Fair’s O’Brien Gate, there is a large inflatable corn on the cob on top of a food stand.

“Something we see a lot, are couples that come and buy a Mexican style corn cup. They only order one cup and when they both try it, they do the line again and order another cup,” said corn stand owner Bob Jackson to La Prensa San Diego. “This demonstrates the great quality of our product.”

“I wanted to serve the corn cups in clear cups. I want people to see what are they are going to eat. Is something different that people seem to really like,” Jackson said. “Each corn cup has mayonnaise, cotija cheese, and a lime slice. The lime slice gets a lot of attention because it makes the corn cup look like a cocktail.”

Jackson’s stand has over 45 years at the fair and is considered as one of the main food stands at the San Diego County Fair. Since the beginning, Jackson has been selling corn, but only into recent years, he started selling it in cups. Before that, the corn was sold grilled on the cob.

“We know where to get the corn, when it is in season, and when it isn’t good. For us, everything relates to the freshness of the corn. When I order corn, the product is sent hydra-cool to me, that means they put a lot of ice in the truck so the corn remains fresh. And we try each day to sell it as fresh as possible,” Jackson said.

“I’ve done a lot of research about corn, because this is really important to me. I also have a machine that was especially made for me so I could sell the corn in a cup. Nobody else has this machine. We used to rip the corn from the maize by hand, but it’s better to do it with the machine. And I think we have an edge because we have the machine to do that.”

The corn stand also offers a special chili blend to put in on top of the corn cups or in the corn on the cob that the stand still sells.

“Since a long time ago I wanted to sell the corn in a cup, but I couldn’t sell it the way I wanted it. And it was really hard to rip the corn by hand and I didn’t want to do corn from a can. So I did some research and found a machine similar to what I wanted and the company that makes it, agreed to build the machine I wanted. This machine is wonderful because we sell a lot of corn cups,” he added. “The corn in a cup sells a lot in Mexico, and here, we sell it to people from all nationalities, and they love it. Some people find it strange to put mayonnaise on the corn cup, but I always tell them that if they don’t like it, I can change their mayonnaise for butter, but they always end up liking the Mexican style corn cup.”