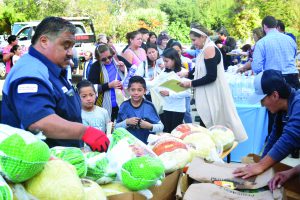 “I’ve been tossing frozen turkeys all morning, so I got frozen hands,” he said laughing. “But It makes me glad to see families get some turkeys so they have have a wonderful, blessed Thanksgiving.”

Families and servicemen lined up outside the Dickinson Farm on 24th Street for a turkey dinner giveaway which started at 10 a.m. and More turkeys would be distributed at the National City Higher Education Center and other school campuses later in the day.

This was the last turkey giveaway in which outgoing National City Mayor will participate in as head of the City. He shares that the event is proof National City’s leadership is about making things happen.

“We are just making sure people get a little bit of the American dream this Thanksgiving because when we think of Thanksgiving we always have that Norman Rockwell picture of people sitting around a turkey dinner and for a lot of families that doesn’t happen, so this is a way of making that happen for residents of National City.”

Although this is Morrison’s last giveaway as mayor, as he is terming out of office this year, he shared he doesn’t feel sad about leaving the event to his successor, mayor elect Alejandra Sotelo-Solis.

“For me, titles are just titles and service is more important. We are still going to serve the people of National City and if there is a need and we will make sure it gets met,” said Morrison, who was elected into the local City Council in November’s Midterm elections.