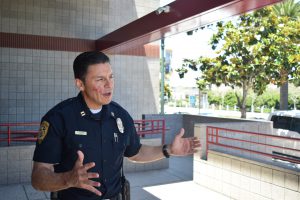 Due to large turnouts, the National City Police Department has asked local soccer fans gathering on Highland Avenue to safely celebrate any future wins by the Mexico Men’s National Team in the 2018 FIFA World Cup.

Starting with Mexico’s first victory in the tournament over heavily-favored Germany, on Sunday, June 17, numerous fans of the Mexican team congregated on sidewalks near the intersection of Plaza and Highland to celebrate with flags and musical instruments, with many taking to the roadways in celebration. The festivities took place again this past Saturday, June 23, when “El Tri” beat South Korea in their second match of the tournament.

“While most fans have celebrated in a peaceful manner, unfortunately, some fans have chosen to leave the safety of sidewalks and parking lots to celebrate in the roadways in traffic,” read a press release by the Police Department, adding that pedestrian overflow from sidewalks into streets is dangerous for both fans and motorists.

“We are worried that any pedestrians who go onto the streets could be run over,” Hernandez said.

The Acting Captain also stated that there will be more police on patrol during Wednesday’s decisive game against Sweden and that the Police Department will be working with the Public Works in case adjacent streets need to be closed off.

Hernandez, who revealed he is a lifelong Mexico fan, said that he hopes the team wins the tournament, and that fans continue to celebrate safely. He also added that the Department will continue to collaborate with Public Works and the community to make sure streets are safe for both fans and vehicles and close off streets if needed.

Depending on a number of results, Mexico may be facing either Brazil or Switzerland on Monday, July 2 in the FIFA World Cup round of 16.