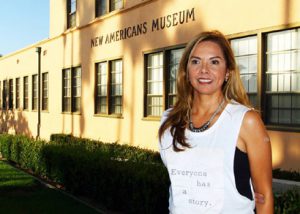 The New Americans Museum will receive a national award in Washington D.C. for its community work in favor of immigrants.This museum was founded 17 years ago by philanthropist and activist Deborah Szekely, with the intent of highlighting the contributions of immigrants to the United States, a goal which has become even more important in recent years with migratory growth.

“Immigrants’ contributions to the success of the United States, historically, have been fundamental. Today it’s more relevant given the anti-immigrant and divisive rhetoric of the current president and his followers. To be able to change these negative narratives is fundamental to our mission”, said Linda Caballero-Sotelo, executive director of the New Americans Museum.

Caballero-Sotelo took over as executive director five years ago. Being a first-generation immigrant, originally from Tijuana, Mexico, she knows border issues very well, and serves as a pillar of the projects that take place in the museum located in Liberty Station.

But it has not been easy, the climate of intolerance has grown since the presidential elections of 2016, becoming a target of anti-immigrant attacks classified as hate crimes.

“One time they vandalized a huge wall that was on display, they wrote racist and hateful slurs. The museum’s reaction was to create a space for open dialogue to explore conflicting points of view”, said Caballero-Sotelo.

The exercise consisted in including the opinions of immigrants and multigenerational refugees, with the objective of serving as a mirror for mainstream American society in order to recognize that the United States was created by migrants from the beginning.

“We displayed racial hatred messages in order to recognize what needs to be done to move the issue forward, it was a positive way of reacting that made migrants feel safe. That was something very special”, said Ciara Merritt, coordinator of the extramural program.

She said that they have rescued parts of the wall that Trump dismantled from the Tijuana-San Diego border wall, and that it will be used as a living memory of what has separated the region, with the intent of placing this piece in a permanent exhibit.

Another way to promote respect for immigrants is through their local and mobile recording studios, spaces where immigrants of any generation can tell their stories orally or digitally. So far, they have 2,500 immigrant stories on file.

The museum community grows through different educational activities, such as oral narratives, essays, forums, exhibitions with a broad program of curatorship in visual arts, with artists working on displacement issues; identity; borders and training programs in micro-enterprises for immigrants with an emphasis on creative sectors.

Through its various activities, the New Americans Museum of San Diego seeks to promote understanding and interaction between newcomers and those born in the United States.

“The importance of the museum is that it breaks the barrier between those who have been in the country for generations, and the immigrants who arrived in these times of migratory conflict; Americans may not have the knowledge of what happens on the border or what the people have to endure to get here and why they do it”, said Merritt.

So far they have had 25 exhibitions, 50 events, pop-up shows, workshops, and other talks and forums. Activities are mostly free to the public, receiving more than 10,000 visitors per year.

They have an annual budget of $500,000 to present all the programs, coming from foundations, organizations and the city of San Diego.

Among its upcoming events is a gala in November, it will be an afternoon of special menus prepared by migrant chefs who will share their journey through their culinary creations.