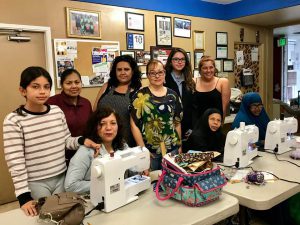 When Genesis Ortega arrived in San Diego, she didn’t have enough money “to buy a pencil”, but that did not stop her from studying English and finding a job to help her parents financially in the Mexican state of Colima.

She had the goal of saving for a business to set up in her hometown, but that did not happen. She met her husband and formed her own family in the United States, and now 20 years have gone by.

Ortega is one of the women who are part of the first micro business workshop in the Extramural Museum Program organized by the Museum of New Americans in San Diego, in collaboration with the Southern Sudanese Community Center in City Heights, which started with a sewing workshop.

“Sometimes, when I don’t have the money to buy something expensive, I go to the Goodwill store, but you have to modify the clothes, sew the hem, that’s why I started taking these workshops, I want to fix my own things and of my children, and maybe in the future to create my own business”, said Ortega.

Like her, 15 women of different nationalities take the workshops given to refugees and immigrants, in order to acquire skills that help them integrate into society.

“We believe that we can teach them without a specific language through the arts, that can make a big impact, especially for people who have just arrived in the United States, and try to start a new life, maybe it will help them generate income”, said Caitlyn Benjamin, project manager.

In City Heights, there is an important community of Vietnamese, but there are also people from Somalia, Ethiopia, Peru, Mexico, among other countries, all immigrants of limited economic resources. “We are creating a link with them to unite the community”, said Benjamin.

The groups are small to give individual support, not only with the workshop, but to learn how to start their own business and promote it in social networks, because many of them do not have email, the success has been such that dozens of people are on a waiting list for upcoming workshops.

Five years ago Aammouna Abdelawal arrived in San Diego from Eritrea, an African country north of Sudan. Violence caused the departure of her family who sought refuge in cities in the United States. She and her husband, along with their two children, managed to be accepted as political refugees.

“There’s no freedom in my country, not only to practice a religion, but also to set up your own business, buy a house, there’s not even work. The government wanted my husband to perform compulsory police service, putting his life at risk, we. (So), like many other people, we had to leave the country”, Abdelawal stated.

As an active Muslim, it has been difficult for her to find specific clothing items in the United States. Sometimes she orders the chador (a head-to-toe tunic with the face exposed) from other countries such as Egypt or Sudan, but Abdelawal hopes that the workshop will help her make her own clothes.

“The museum helps us a lot. I’m always asking about some class or activity. I’m very happy to be in this group; the teacher and all the people who work here are very kind”, Abdelawal concluded.

The sewing teacher is Mexican-born Leticia Boquiren, who has more than 10 years teaching workshops. When the museum approached her to give the workshops, she became immediately interested, despite not speaking English correctly.

“For me it is interesting to teach people who come from other countries, although we do not speak the same language we communicate in some way”, said Boquiren. “Most didn’t know how to sew anything, here they learned to use the machine, and because their clothes are much easier to sew than those of Mexico or the United States, since they wear skirts or straight dresses, they can easily make them.

The workshop is free, open to women and men, and will continue until the end of June. Weaving and jewelry design classes focused on the creation of a business will be offered in the future as well.