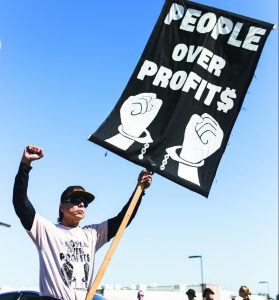 Iris Abigail Chacon Flores, who left El Salvador to escape violence, said she will never forget what she felt when she turned herself in to immigration authorities. Chacon Flores said her feet were shackled, her hands shackled. She said what surprised her the most were the shackles placed around her stomach. She was five months pregnant.

“I felt it wasn’t me they were chaining up, but my baby who was the one getting chained up, before it was even born into the world. I felt morally damaged, psychologically, when I was chained up in that manner,” Flores Chacon said.

Flores Chacon was one of several people at a rally last Sunday in Otay Mesa speaking against the treatment of detainees inside the Otay Mesa Detention Center, and also against the Trump administration’s new Zero Tolerance policies, including the policy separating parents from their children.

A letter signed by nearly 50 immigrants detained inside the CoreCivic facility denounced family separation, arbitrary and prolonged detention, and listed a number of complaints about how they are treated at the center.

Lauren Mack, a spokesperson for Immigration and Customs Enforcement said in a statement, “ICE is committed to ensuring the health, safety, and welfare of all those in our care. The ICE compliance unit at the Otay Mesa Detention Center that monitors CoreCivic, formerly Corrections Corporation of America (CCA), is currently looking into the complaints alleged in the letter distributed by the migrant caravan organizers. Several of the issues described in this letter have been addressed in response to previous complaints.”

Tristan Philip, one of the organizers from Sunday’s rally said the immigrants at the detention center include both men and women, some of whom have been separated from their children.

Flores Chacon was released sometime after November of last year after a chemical was accidently released causing women in the detention center to faint and vomit.

Their stories represent just some of the recent developments and challenges before those who cross the U.S. border, and they could be escalating.

An immigrant from Honduras separated from his wife and child took his life last month.

An incident report from the Starr County sheriff’s department obtained by the Washington Post said Marco Antonio Muñoz, 39, killed himself in a jail in Texas.

His suicide was just weeks after the policy forcing the separation of children from their parents at the border was implemented.

Also this week, U.S. Attorney General Jeff Sessions handed a new challenge to those who seek asylum over domestic abuse and gang violence claims, saying they were not grounds for asylum.

Central Americans could be most affected by the changes, with many coming to the U.S. to escape danger in their home countries. Immigrants at the Otay Mesa facility would also be affected.

Ur Jaddou, a former Chief Council to U.S. Citizenship and Immigration Services (USCIS) and current Director of America’s Voice, DHS Watch, explained the significance of the Attorney General’s policy change.

“I think he’s trying to make it so that the vast majority of cases are always a no. I look at this decision in light of all the other things that he’s doing and I sort of see it as his grand plan for border security, which starts with striking fear in families by separating them, and prosecuting parents. He’s basically telling judges, if they didn’t follow legal processes to come and enter the country, you can consider that in your discretion, and maybe deny the valid legitimate asylum claim,” Jaddou said.

In Washington, Republicans are expected to vote on two immigration bills next week, one bill would propose new strict measures and would not include a legal path to citizenship for young “Dreamer,” immigrants who were brought into the country without documentation. The other bill is said to include a path to citizenship and is believed to be a compromise between moderates and conservatives.

Just a few days ago, California Democratic Senator Dianne Feinstein and 31 other Senators introduced the Keep Families Together Act, a bill that would keep the Department of Homeland Security from taking children from their parents at the border.

The bill is one of the latest efforts to stop the separation of families as criticism continues to rise.

The American Academy of Pediatrics (AAP) is asking for an end to the policy. Colleen Kraft, president of AAP, also said that highly stressful experiences like family separation, could cause irreparable harm to children’s health, disrupting their brain architecture and affecting short- and long-term health.

About one hundred people stood together during Sunday’s rally outside the Otay Mesa detention center to show support for those inside and to call for an end to the separation of families. Sarah Gore Maiani, the daughter of former Vice President Al Gore, drove from Santa Barbara to attend the rally.

“I understand the legal process from the ACLU from their lawsuits, that it will take its course, and I have faith it will restore justice, but I don’t want to wait that long. So I’m hoping there can be political pressure that’s effective. I know there are many injustices, the family separation in particular that Trump, Sessions and Neilson have put into place is unconscionable and should end immediately,” Gore Maiani said.