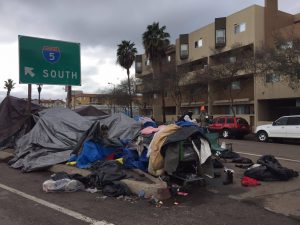 With the opening of a storage facility for homeless individuals opening up in their neighborhood, administrators of a school in the Sherman Heights area are not pleased with the new facility operating in their backyard.

Members of the Our Lady’s School administration have expressed concern over the facility and its impact on the campus and neighborhood.

The school, located near the Commercial Street Interstate 5 overpass, which was a hotbed for homeless encampments before being cleared out, has long been affected by the already-high homeless population in the area.

“Our children have seen things that they should not have seen at their young age,” said Donna Coduti of Our Lady’s School in reference to individuals engaging in drug use and relieving themselves in an alley facing a school playground in the past.

Kindergarten teacher and vice principal Mary Deely is concerned over the issue of security and police, as the city will only have increased patrols in the area during the facility’s first 90 days of operation.
The opening of the facility was scheduled until after the end of the school year, and with increased
police presence while no children are in school, Deely is critical of what is to come after this period.
“What happens on day 91?”, she said. “If the center will continue to operate, the increased security or police needs to continue.”

The 22,000-square foot Storage Connect Center, which opened this Wednesday morning on the corner of 20th and Commercial, will provide 500 storage containers for homeless individuals to place their belongings. Local nonprofit Mental Health Systems is responsible for the operation of this warehouse facility.

The creation of such a storage facility for downtown-area homeless was brought up in January during San Diego Mayor Kevin Faulconer’s State of the City address. FSince the announcement was made in January by Faulconer, neighborhood residents and the school have opposed to the opening of the center, as they were not consulted about the location and possible impact.

The opening of the facility was approved in an 8-1 City Council vote during a meeting held on March 20. Since then, a number of workshops have were held to answer questions from community members and provide feedback to the city regarding the facility.