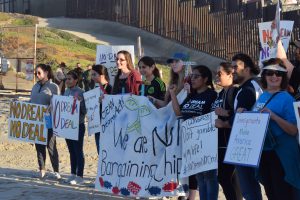 A recent survey from the Pew Research Center finds more Latinos are feeling troubled about their place in America under President Trump.

The nonpartisan survey finds 49 percent now feel worried as compared to 41 percent in 2017.

The Pew survey also found during the first 18 months of the Donald Trump presidency, an increased number of Latinos saw a worsening situation for themselves and are also still becoming more pessimistic.

There is also an erosion in optimism about the future financial well-being of Latino children. Foreign-born Latinos are feeling it more, especially those who are not U.S. citizens.

Overall, 6 in 10 Latinos say they are dissatisfied with the way things are going in the country today.

Enrique Morones, executive director and founder of Border Angels, explained why Latinos could be feeling the situation is worsening for themselves.

“Hate words lead to hate actions. The rise in hate crimes and mass killings is attributed to one person, Trump,” he said.

In the past year, 4 in 10 Latinos say they have experienced discrimination, such as being criticized for speaking Spanish or being told to go back to their home country.

The new survey also found that even though recent reports say the U.S. economy has improved, Latino adults are more downbeat about their current financial situation today than they were three years ago.

In the survey, 55 percent of Latinos, regardless of legal status, say they worry “a lot” or “some” that they, a family member or a close friend could be deported.

Morones also points out, “People are in fear, they have seen their friends deported, terrorized and even killed. We are all outraged and paying attention.”