Newsom and Cox Move on to November’s Governor Race 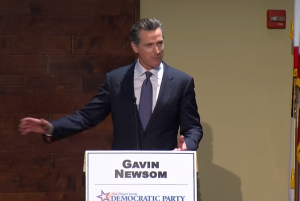 Candidates representing both major parties will be vying for the Governorship of California this November.

Republican John Cox and Democrat Gavin Newsom respectively captured 34 and 26 percent of votes cast in the gubernatorial primary to secure their bids in the 2018 General Election.
From a campaign election day event at downtown’s US Grant Hotel, Cox took little time to attack Newsom on topics such as homelessness and an economic downturn over Jerry Brown’s tenure.

“Mr. Newsom, you’ve had eight years, and your party has made a colossal mess of this once golden state,” Cox said.

Cox, who was born in Illinois, ran his bid on platforms such as repealing California’s tax on gasoline, better managing the State’s finances, and border security issues. An endorsement from Donald Trump in the last month of campaigning saw Cox’s popularity rise and secured a competitive bid for a top-two placing.

This is his first significant electoral victory after a long string of failed political bids in both his home state and California.

Meanwhile, from a celebratory rally in San Francisco, Newsom stated that his team is engaged in an “epic battle” and that voters will have to choose between two very different candidates and their approaches toward handling the presidential administration’s demands.
“It looks like voters will have a real choice this November between a governor who is going to stand up against Donald Trump and a foot soldier in his war on California,” Newsom said, alluding to Cox’s endorsement from the president.

Newsom, who has served as the State lieutenant governor during Governor Brown’s tenure, announced he would be running for governor three years ago, much earlier than his opponents.

With nearly a year’s head start in fundraising and campaigning, Newsom capitalized on these advantages and ran a platform that included promises of universal healthcare, affordable housing, and equality for marginalized groups.

Through a campaign which heavily promoted pro-immigrant messages and addressing the needs of middle and working class californians, Villaraigosa looked to make the most of a strong support base in the Los Angeles area and among Latino voters.

In his concession speech, Villaraigosa asked Californians to support Newsom and to demand more from politicians.

Going into November, analysts predict Trump-endorsed Cox will be facing tough odds, as California leans Democrat in similar races and republican voter registration is on the decline. Analysts also point out that in 2016 Trump lost California to Hillary Clinton by over 4 million votes, which could be an precursor to another Republican defeat.

In total, 27 candidates made the bid for the governor’s seat. Notable candidates among these were former State treasurer John Chiang and former State superintendent Delaine Eastin.

The 2018 General Election will be held on Tuesday, November 6.