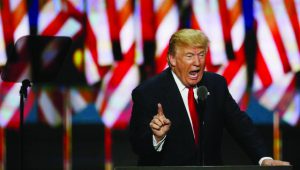 For years, businessman Donald Trump and candidate Donald Trump both criticized China as a “currency manipulator” because that country de-values its own currency to make its exports more affordable to international buyers.

That tactic has worked well for China but has been criticized by America and other countries that compete with it on the open markets.

Just this past Monday, US Treasury Secretary Steven Mnuchin declared China to be in violation of the US Omnibus Trade and Competitiveness Act of 1988 which calls out countries for manipulating the exchange rate of its currency to affect the balance of trade, a presumably bad thing to do. Chinas recently let its yuan fall to a 10-year low of about 7 yuan to the dollar.

Well, not to be outdone by China, on Thursday President Donald Trump pronounced on Twitter that he believes the strong dollar has been a burden on American companies trying to sell abroad, and criticized our currency as overvalued.

“As your President, one would think that I would be thrilled with our very strong dollar,” Trump tweeted. “I am not!,” he added, saying the Federal Reserve has been “wrong at every step of the way, and we are still winning.”

Trump has been critical of the Federal Reserve, and especially its Chairman Jerome Powell, who Trump appointed just this year. Trump has pressured the Fed to lower interest rates and last week, it did just that, believing that cheaper money will add more fuel to our already hot economy.

But a strong dollar has historically been a good thing, helping to keep inflation in check by not letting prices rise too quickly. For American consumers, a strong dollar means goods are relatively cheaper, and buying foreign goods is even better yet.

This week’s comments were not the first time the President Trump has talked down our own currency.

In January 2017, President-elect Donald Trump told the Wall Street Journal that he thought the dollar was “too strong” and after only a few months in office said he likes a dollar that’s “not too strong”.

The irony is that the causes of a strong dollar are a strong economy and low unemployment, two things Trump has promised to achieve and he often takes credit for.

Another force driving the dollar higher is the fear of inflation stemming from reduced international trade, a direct result of Trump’s tariff wars with China and Mexico.

Trump’s constant harping about a strong dollar is most likely tied to its negative effects on American exports, one of his signature policy positions that has driven his public infatuation with renegotiating trade deals and using tariffs to punish countries into agreeing.

A strong dollar makes our exports more expensive in other countries, reducing their purchases of American goods and making other foreign goods appear to be cheaper in comparison.

It is unusual, though, to have to US President criticizing a strong dollar. There are very few public comments from past Presidents to even compare to Trump’s recent attack on the dollar.

In 2003, then-President George W. Bush said that a declining dollar was “contrary to our policies”, and most Presidents even take credit for a strong dollar.

The only comparable situation of a US Administration working to weaken the dollar was early in Bill Clinton’s first term.

In 1993, Japan was the US’s trade concerns because our trade deficit had ballooned during Japan’s rapid growth in exports. Clinton’s first Treasury Secretary, former Senator Lloyd Bentsen, argued for a stronger yen to help balance our trade deficit by making Japan goods more expensive to America consumers, and American exports cheaper to Japan.

Although that position seems comparable to Trump’s tactics, Clinton was a free trader that signed NAFTA into law and supported other trade deals.

But the policy view on a weaker dollar ended just two years later when Clinton’s second Treasury Secretary Robert Rubin, a former Goldman Sachs executive, argued for a strong dollar because he knew it’s the global currency against which every other currency is traded on the foreign exchange markets.

In the end, Trump’s stated desire for a weaker dollar may be unattainable given his own policy decisions and real world implications of his actions.

One of Trump’s signature (and almost singular) policy achievements was the massive tax cut package he championed and signed into law in 2017. The reduced taxes mostly on wealthy individuals and companies, but was not accompanied by offsetting cuts in the national budget.

The tax deal is estimated to end up adding $1.5 trillion to our debt over the next 10 years, driving debt to be over 90% of our gross domestic product, or GDP, the accepted value of our economy.

Even worse, Trump and Republicans in Congress, have continued on a spending spree that has ballooned our annual budget deficit to nearly $1 trillion annually, or about 4.25% of GDP, above the average over the past 50 years.

Trump’s use of trade tariffs on China, Canada, and Mexico as tools to force negotiations on trade deals has reduced overall trade around the world by reducing other countries’ exports of steel, aluminum, crops, and other goods.

In response, other countries have used their own monetary policies to weaken their currencies to bolster their economies.

Those weaker currencies have made the dollar seem stronger, adding fuel to Trump’s ire against the greenback.

Trump has been an unconventional President by all measures. He’s impulsive and follows his gut. He shoots from the hip. He says what he thinks.

Those traits have served him well politically but it’s too early to know what lasting impacts he he may have on world markets.

He has turned the Republican Party on its head by supporting policies that run contrary to the GOP’s long-standing views, including on trade and deficits. In the long run, the Party will have to deal with the consequences, if any, of those changes.

But Trump’s seemingly chaotic and often counterproductive positions on trade, tariffs, and the dollar affect global economic realities, and could leave long-lasting impacts well beyond his four or (dare I say) eight years in office.

For now, the US and global markets will just have to hang on tight to ride this rollercoaster out to the end to see where our combative President takes us.

The dollar could continue to be the world’s currency, or yield to the yuan as the bellweather coin of the realm. Trump’s actions may be helping China more than America to make that happen.