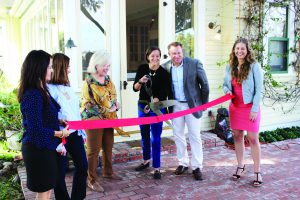 A new teaching kitchen that will serve children, adults, and entire families in the communities of South County was unveiled at the Olivewood Gardens and Learning Center in National City, on Saturday, November 17.

“Thanks to the community and our generous donors, Olivewood will be able to reach many more thousands of residents in National City and the communities of South County San Diego,” said Jen Nation, Olivewood’s executive director. “Our new kitchen will provide more space for kids and adults to learn hands-on cooking skills, make healthy choices for their families, and increase their overall health and wellbeing.”

Over the past eight years, Olivewood has served nearly 65,000 people through their nutrition education and environmental stewardship programs. The expanded kitchen, designed and remodeled by Lars Remodeling and Design, will support Olivewood’s signature cooking programs. Those programs include the Chefcitos program for children age five to 12, adult cooking classes, and the seven-week, bilingual Cooking for Salud program that helps families change their cooking and eating habits. The graduates of Cooking for Salud, known as “Kitchenistas,” are featured in the documentary film “The Kitchenistas of National City,” which continues to stream on KPBS and other public television stations across the country.

“The chefs come from all over San Diego and teach us everything from how to include vegetables and fruits in meals, nutrition basics, kitchen techniques and even how to prepare our own dressings,” said Paty Corona, Cooking for Salud coordinator. “In the Cooking for Salud program, we learn everything about fat, salt and sugar.”

Created in 2008 by the International Community Foundation, Olivewood has been recognized as a Public Health Champion by San Diego County’s Live Well San Diego campaign. The South County non-profit organization has a team of thirteen staff and over 390 volunteers, including high school interns, college student interns, and volunteer professional chefs from across San Diego County.

“Lars Remodeling is proud to have had the opportunity to partner with this fantastic organization and develop a plan that we feel will meet the needs of Olivewood Gardens to serve National City and the communities of the South Bay well into the future,” said Jason Larson, President and Founder of Lars Remodeling and Design, the sponsor of the grand opening. “We are big believers in Olivewood Garden’s mission to cultivate a healthier community and are thrilled to support this event.”