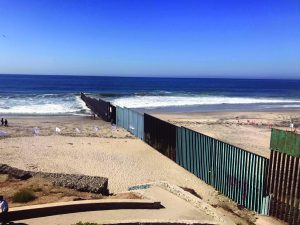 The San Diego Regional Water Quality Control Board has filed a lawsuit against the U.S. Section of the International Boundary and Water Commission (IBWC), joining the Port of San Diego and the cities of Chula Vista and Imperial Beach –who filed suit in March of this year– and the Surfrider Foundation, whose suit was filed in July.

The 204-page court document alleges years of inaction by federal agencies and a constant concern due to millions of gallons of transboundary sewage flows containing trash, pesticides, and heavy metals that spill out into the Pacific Ocean.

Although in the first lawsuit by the City and Port of San Diego IBWC argued in federal court that it could not be held liable because it was a natural flow of waters “coming from Mexico”, the new plaintiff is asking the court to find that the IBWC repeatedly violated Clean Water Act provisions.

Court documents state that, over the past decade, California coastal cities closed beaches on 600 occasions due to contaminated water spilling into beaches, and that over 11 million gallons of untreated sewage have been spilled from 2015 to date.

In spite of the information provided by the San Diego Water Board, Tijuana’s water utility (CESPT, for its initials in Spanish) told the San Diego Regional Chamber of Commerce that it has no record of any significant spills in 2018, adding that the situation was now under control and that not a single liter of contaminated water was crossing the border.

“All of it is retained; the [IBWC] also invested in some sort of screens to retain solids to keep them from damaging our plant,” said CESPT Director German Lizola Marquez. “There have only been small events due to technical issues.”

Lizola Marquez also told the Southern California businessmen that the events that have occurred in 2018 were immediately addressed and did not cause any significant impacts on the coast, in contrast with 2017, when atypical rains caused a state of emergency along the border.

Mexican authorities reported that, in order to resolve the issue, Mexico has invested $253 million pesos, of which $58.74 million were provided by the federal government, $14.9 by the North American Development Bank, and the rest by the Baja California government.

The intent of the lawsuits is for the U.S. federal government to add to Mexico’s investments so that together they can reduce the risk of illness for residents who come in contact with these cross-border waters.

Imperial Beach residents like Angela Howe have stated that they’re the ones suffering the consequences of the lack of negotiations and necessary investments to end the contamination issue, a problem that has mothers in constant fear of taking their children to enjoy the local beaches.