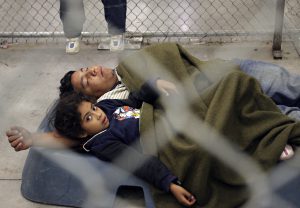 Opposition to plans for a temporary encampment for immigrants without documentation at Camp Pendleton was strong at a community forum in Fallbrook held last Saturday.

Ricardo Favela, a spokesperson for the Fallbrook Human Rights Committee and one of the organizers of the community forum, said when he first heard the news about the potential encampments back in June, he found it “alarming.”

“Because first of all, we are talking about refugees which include people that have the right to ask for asylum. They are not committing a crime. It’s their right. There is no reason why there should be these centers of detention,” Favela said.

In June of this year, Time magazine reported Camp Pendleton was on the list of locations for a temporary encampment to house up to 47,000 immigrants without legal documentation.

A report from the LA Times from June of this year stated Camp Pendleton officials had no idea that they were being considered for what some refer to a “tent city.”

The Department of Health and Human Services grants money for shelters, foster care and other child welfare services for detained unaccompanied and separated children. The Associated Press reports funding soared from $74.5 million in 2007 to $958 million last year. Over the past decade, the AP also reports by far the largest recipients of taxpayer money have been Southwest Key and Baptist Child & Family Services.

“It’s convenient for them to have a hard immigration policy that criminalizes our people. From every way we see it, it’s unfair,” Favela said.

Looking to discourage undocumented immigrants at the border, a week ago the White House announced plans to hold immigrant parents and their children together in detention while they wait for their cases to be heard.

The Trump Administration wants to go around a court agreement known as the Flores Agreement that requires immigrant children to be released after 20 days in detention.

Time magazine reports the White House wants to detain families by creating a new rule allowing it to bypass the court and also allow the federal government to transfer family units to facilities that are not “state licensed,” which is currently required.

Time also reports the public will have 60 days to provide comments before agencies move forward with a final proposal.

It’s those past actions, in part, that made detaining immigrants and holding immigrants in detention centers the central themes discussed at the forum.

The Fallbrook Democratic Club also had a strong presence at the meeting. Several Democratic candidates running for elected office in Fallbrook also attended. The San Diego Party for Socialism & Liberation and Alianza Comunitaria were also among the forum’s organizers. Representatives with the Otay Mesa Detention Resistance Committee of the grassroots organization Pueblo Sin Fronteras were also present and spoke at the forum.

Senior Staff Attorney Monika Langarica with the American Bar Association Immigration and Justice Project talked about the history of detention during the forum.

“Is it a crime to be undocumented?” Langarica asked attendees and explained. “There is no statue in the federal code that criminalizes the act of being an individual that is undocumented.”

She also described tools of the criminalization of migration. Langarica said detention is one of them because it’s not necessary and not mandated and pointed out legislation throughout the history of the U.S. has been used to control migration, the Chinese Exclusion Act among those.

Detention centers have also been the subject of legislative action at the federal level.

U.S. Senator Kamala Harris of California, along with U.S. Senator Pramila Jayapal from the state of Washington introduced a bill earlier this year to increase oversight of Immigration and Customs Enforcement detention centers, and also end contracts for facilities receiving less than adequate ratings in inspections and audits.

According to Senator Harris and Senator Jayapal, over the last two decades the federal immigration system has undergone a dramatic expansion that has led to a 400% increase in detained non-citizens with an increasing number being children, women, and pregnant women. These detainees are often mistreated by ICE agents and forced to reside in deplorable conditions, habitually and systemically violating their rights.

“It is unconscionable to subject detainees to inhumane conditions that include cases of unchecked sexual abuse, outright medical negligence, lack of access to counsel, and in some cases even death. It’s time to end the expansion of these facilities that divert these resources to address true public safety threats,” U.S. Senator Harris said.

In a letter to the inspectors general for the departments of Homeland Security and Health and Human Services, Grassley and Feinstein outline troubling allegations dating back years. They also asked for policy recommendations to prevent the abuse in the future.

The forum was entitled, “No Internment Camps, Never Again.”

About the title and detention centers, Favela said, “For us, we compare it to a concentration camp because the people have a legal right to seek asylum and there should be a process to accommodate them in a dignified manner.”

“Just because they decided not to build one for now doesn’t mean in the future they won’t. That’s why in this moment we are working with other organizations to create greater opposition not just in Fallbrook, but in other surrounding communities,” Favela said.