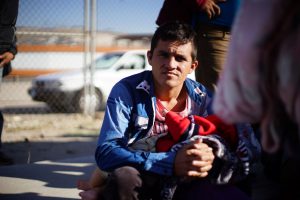 Ramon is an immigrant from El Salvador and a family man who traveled to Tijuana with the hope of crossing into the United States to request asylum for he and his family. After fleeing from violence and danger in his home country, he shares, he and his family faced more of the same on their journey to the border.

“So, while it is true that we got a humanitarian visa in Mexico and that made our road a bit easier, they cannot protect us, keep things from happening to us until we reach the border,” said the migrant, “it’s impossible, and on our trip we had money taken from us several times.”

Ramon says that is the reason migrants prefer traveling as caravans, to protect and help each other. However, he shared that “when we were going through Guatemala, for example, and then in Veracruz [Mexico], gang members or [organized] crime charge to let you through, and if you don’t pay, they take everything and even threaten to take the wives, the girls.”

“If you don’t pay, the trip is over, because what can you do,” he sighed.

A new report published by RAND Corporation this week indicates that this kind of situation is more commonplace than one might think.

The monies collected by organized crime and other actors from Central American migrants seeking asylum can reach into the billions, says the research released by the nonpartisan non-profit.

The report estimates that the smuggling of unlawful migrants from the Northern Triangle region of Central America—Guatemala, Honduras and El Salvador—to the United States generated between $200 million and $2.3 billion for human smugglers in 2017.”

The report also finds that transnational criminal organizations (TCOs) collect “taxes” to allow migrants to enter or travel through their territories while in transit to the U.S. border.

Regarding the huge gap in the estimated amounts – between a few hundred million and billions of dollars – report co-author Blas Nuñez-Neto told La Prensa San Diego that the fluctuation is due to the fact that the report was not based on field research, but rather on an analysis of data provided by the Department of Homeland Security (DHS) and expert interviews.

“In particular, there was disparate information as to how many migrants use smugglers, as well as regarding the fees they pay,” said the researcher.

As part of their “fee” to bring them through “these TCOs can also coordinate the moment they smuggle the immigrants to divert attention from other illegal activities, and they recruit or even force some immigrants to smuggle drugs with them.”

The report, “Human Smuggling and Associated Revenues: What Do or Can We Know About Routes from Central America to the United States?”, was done on behalf of DHS and published on Monday, April 22, according to an excerpt provided to Mexico’s Excelsior newspaper.

The findings could bolster the White House’s arguments criminalizing migrants. The report refers to these Central American migrants as “unlawful” and fails to mention their intention to request asylum.

Blas Nuñez-Neto, co-author and senior policy researcher at RAND, stated that “providing the Department of Homeland Security with a better understanding of how TCOs and other actors that participate in human smuggling are structured, do business, and are financed could help inform efforts to investigate and disrupt them.”

“At best, we could provide a broad range for the revenues to all types of human smugglers,” said RAND senior economist Victoria Greenfield regarding the wide-ranging estimates. “We learned that human smuggling involves many different types of actors and that we could not credibly distinguish most criminal organizations’ activities and revenues from those of other actors, including ad hoc groups and independent operators, that engage in human smuggling.”

According to the report, TCOs are not the main actors exploiting the smuggling of Central American migrants, but rather a whole structure of organizations and groups that control the migrants’ journey north.

“RAND’s analysis suggests that human smuggling involves many other types of actors that often operate independently,” says the report, which defines TCOs as “self-perpetuating criminal entities that challenge the rule of law and represent a potential threat to homeland security.” It further states that migrants often hire smugglers and pay others for the right to pass.