San Diego City Attorney Mara Elliott failed to report several political contributions she received from lobbyists during the same period she and members of her staff met with them on important City issues pending her approval.

The contributions from lawyers at Sheppard Mullin Richter & Hampton LLP, an international law firm with offices in San Diego which lobbies for several clients with interests before the City, seem to be connected to a fundraiser the law firm co-sponsored for Elliott on December 17, 2020.

The online video-conference event, held weeks after she won re-election in November, was reported as a “fundraiser for the Mara Elliott Legal Defense Fund” that raised $2,600 toward paying off legal expense debts, according to the lobbyists’ official disclosure report.

Legal defense funds, officially called “Professional Expense Committees”, are similar to campaign committees, but are restricted to only allow for payment of professional fees and costs for “the retention of an attorney, treasurer, fundraiser, or any other person retained to perform services reasonably related to the purpose for which a professional expense committee is created.” Candidates and elected City officials can use legal defense funds in addition to their usual campaign committees.

The Mara Elliott Legal Defense Fund was created in September 2020 “to Pay Fines Related to Statement of Qualifications Action Case No. 37-2020-00028168-CU-WM-CTL,” a case Elliott lost in August 2020 after she attempted to misuse an endorsement from the San Diego Union-Tribune on her November election ballot statement. The form lists no other cases.

These legal defense funds are authorized and regulated by the City’s Election Campaign Control Ordinance which limits donations to a maximum of $650 per person per year, and the limit can be multiplied by the number of active legal cases filed against the official or candidate, but the fund cannot be used to pay fees for cases filed by the official as a plaintiff.

Elliott’s signed financial disclosures for her legal defense fund reported two contributions totaling $850 between the date it was created and the end of the year.

Both donations were from lawyers from Sheppard, Mullin, Richter & Hampton on December 17, 2020, the date of the fundraiser: one from Jeffrey Forrest for $600; and $250 from Inga Lintvedt. Both lawyers are registered lobbyists representing clients before City officials, including Mara Elliott and members of her City Attorney Office staff.

The committee ended the year with $18,883.66 in debt, even after raising the reported $850. Elliott and her treasurer, Denise Lewis, both submitted the reports under penalty of perjury attesting to their accuracy as “true and correct.”

But an official report filed by Sheppard Mullin for the fourth quarter of 2020 disclosed seven contributions to the Mara Elliott Legal Defense Fund, including the two contributions from Jeffrey Forrest and Inga Lintvedt reported by Elliott’s committee.

The report was filed by Jeffrey Forrest and signed under penalty of perjury as being true and correct.

The lobbyists’ report, however, also includes five other contributions not disclosed in Elliott’s official financial report for the legal defense fund: two additional contributions from Forrest for $500 each, two from Whitney Hodges for $250 each, and one from Matthew Halgren for $500. Hodges and Halgren are also attorneys with Sheppard Mullin. 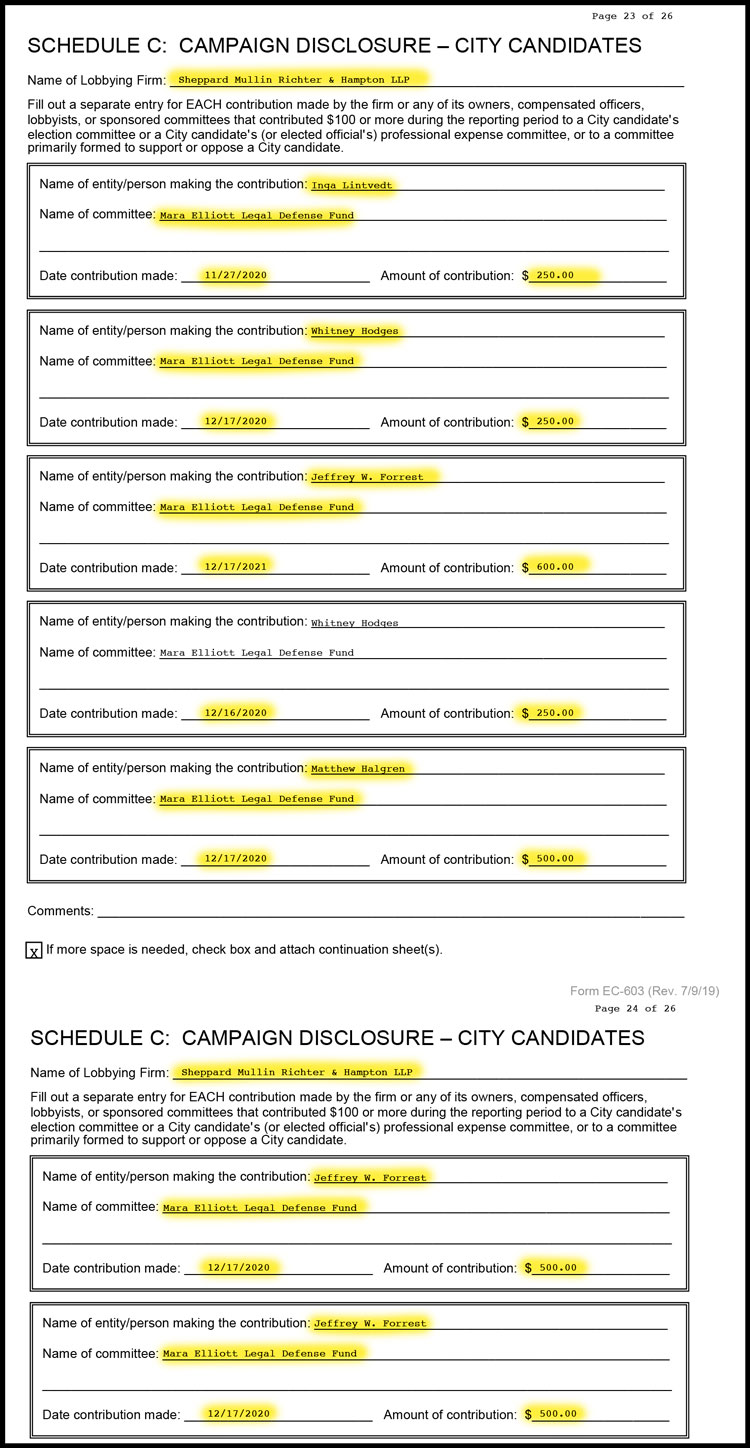 In addition to reporting political contributions, the lobbyists’ report also shows that Forrest and Lintvedt met with Elliott, members of her City Attorney staff, and other City officials during the same period to lobby for their support of client projects, including some of the biggest decisions pending before the City at the time. 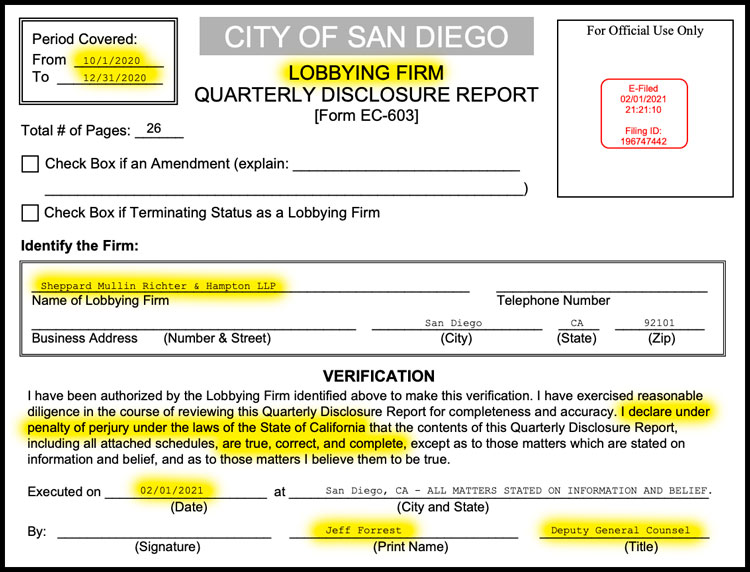 The Sheppard Mullin lobbyist report details their lobbying fees and activity during the period, which included:

La Prensa San Diego reached out to Jeffrey Forrest to confirm the contribution disclosures and lobbying report were accurate. When reached by phone, Forrest repeatedly answered, “I am not authorized to speak to the Press” to several questions about the report he signed under penalty of perjury. Forrest did not provide the name of anyone at Sheppard Mullin that could respond to questions about the report.

La Prensa San Diego reported last week that Elliott sent out a fundraising email soliciting contribution for her legal defense fund using her political opponent as the reason for the donation request.

Elliott’s email, titled “We still need your help“, claims that “Cory Briggs personally sued me three times” and that “I need your help to support our Legal Defense Fund to beat back Cory Briggs’ ridiculous attacks in court“. Briggs is a local attorney that ran against Elliott in last year’s election. 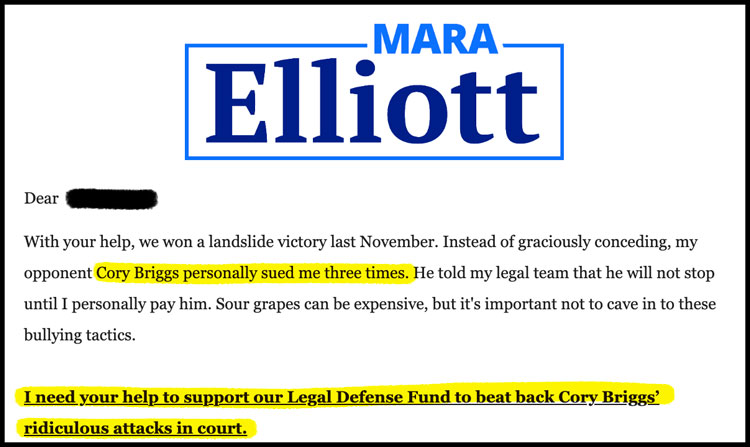 In reviewing the other three lawsuits involving the two principals, Elliott seems to have misrepresented the cases and who sued whom:

The email’s claim that “instead of graciously conceding, Cory Briggs personally sued me three times” gives the impression that the lawsuits were in retaliation after the campaign, when, in fact, all four were filed, and two were decided in Briggs’ favor, months before the election took place.

Although she calls Briggs’ lawsuits “frivolous”, Elliott lost the two cases that have been decided so far, and the other two are is still pending.

But the link in the message, however, sends visitors to an online payment page for “Mara Elliott for City Attorney 2020” that raises money for Elliott’s 2020 election campaign committee debt, not the legal defense fund. Elliott’s campaign committee spent $426,373.89 last year, but ended 2020 with campaign debts of $18,764.01.

Four contribution buttons on the fundraising page list donations of $250, $500, $750, and $1,150, the maximum contribution allowed for the campaign committee, which is nearly twice the legal limit for the defense fund committee.

The message mentions that additional contributions beyond the maximum political committee limit can also be made to the “Legal Defense Fund” and links to another page that explains that Elliott hopes to raise “at least another $100,000 in the next few months.”

This week, Elliott sent out another fundraising email announcing “a fun virtual evening with Mayor Todd Gloria to support our debt retirement efforts.” The event is scheduled for March 24th, and provides a link to donate online, as well as to RSVP for the event. 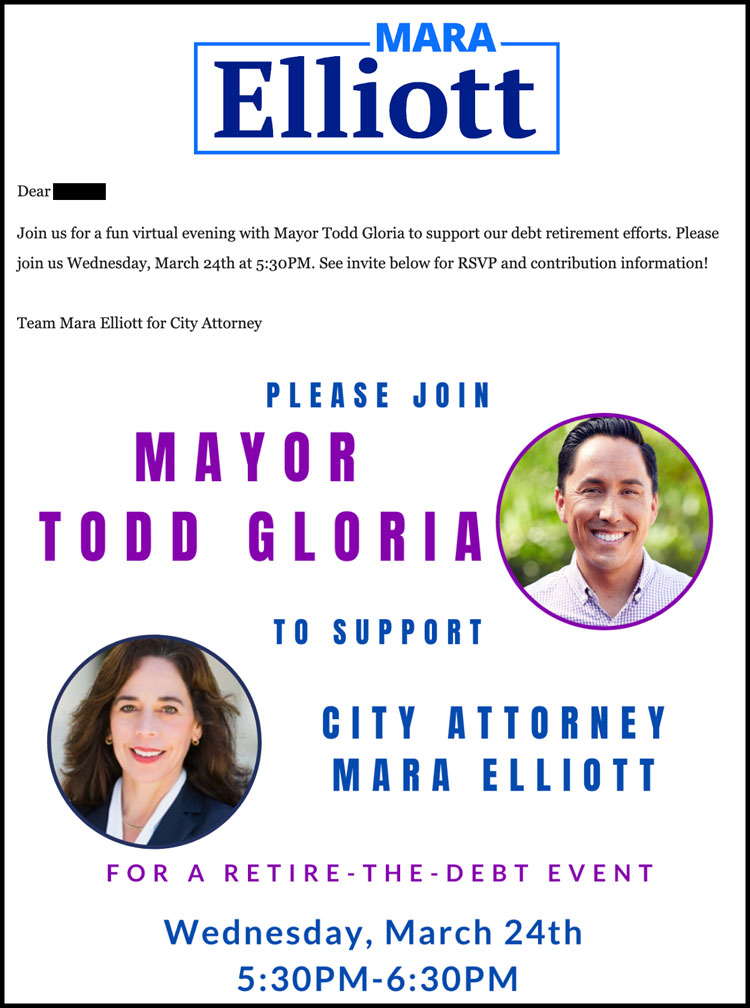 The new email links directly to a donation page for Mara Elliott for City Attorney 2020 with suggested contributions levels of $100, $250, $500, and $1,150, the maximum amount allowed per person per election.

The email also includes a disclosure that it is paid for by Paid for by Mara Elliott for City Attorney 2020, not the Mara Elliott Legal Defense Fund.

Elliott’s use of debt after the election allows her to continue to raise money from individuals and lobbyists that have issues or projects before the City Council and her office. Every decision that is made by the City Council is vetted and approved by the City Attorney’s Office.

Individual lobbyists and their firms are required to disclosure campaign contributions to all City elected officials, as well as candidates for City offices, and must also disclose the names of City officials and staff that they contact while lobbying for support for clients.

Although it is legal for elected officials to receive contributions from lobbyists with interests and clients before them, all contributions must be properly disclosed by both the lobbyist giving the donation and the official receiving the funds.

The San Diego Ethics Commission is responsible for reviewing violations of the City’s campaign and lobbying ordinance.

The Commission’s mission is to “preserve public confidence in our City government through education, advice, and the prompt and fair enforcement of local governmental ethics laws.”

According to one source, a complaint has already been filed against Elliott, Sheppard Mullin, and the individual lobbyists related to these issues.

The Commission can investigate and take action against someone who fails to comply with the ordinance, including issuing warnings, fines, or referring the matter to the City Attorney’s Office for prosecution.

Within the City of San Diego, the City Attorney has the power to file misdemeanor charges.

In this situation, Elliott would have a conflict of interest if she committed a violation of the Municipal Code, so in such cases, the matter would be referred to the San Diego County District Attorney’s office for review.

But in cases where the District Attorney’s office may have a conflict of interest, the case would then be sent to the California Attorney General for review.

Another recent San Diego case went through that exact review process due to an actual or perceived conflict of interest.

In 2017, Councilman Chris Cate was investigated for leaking a confidential City document related to the SoccerCity proposal.

Elliott referred the case to District Attorney Summer Stephans’ office for investigation, but the DA forwarded to the Attorney General because Stephan and Cate shared the same political consultant, Jason Roe.

Although the Attorney General’s office later declined to prosecute Cate, the Ethics Commission issued the Councilman a $5,000 fine for leaking the confidential document.

The present situation could follow the same path for similar reasons.

District Attorney Summer Stephan recently hired Rottenstreich to manage her upcoming re-election campaign. As in the Cate case, the fact that both officials share the same political consultant may give the appearance of a conflict of interest.

Elliott worked within the City Attorney’s Office, rising to the position of a Chief Deputy City Attorney, before being elected in 2016, then re-elected last year. She will be termed out of office in December 2024 under the City’s two-term limits. She was first admitted to the California Bar Association in December 1994.

Elliott’s office did not respond to a request for comment on the status of her legal defense fund, or the fact that her Form 410 states the use of funds to pay for a fine in violation of the City’s Municipal Code.

Although the City Attorney’s Office has not responded to repeated requests for comment, Mara Elliott took to Twitter to personally respond after La Prensa San Diego posted the story last week detailing her fundraising email and her mischaracterization of Briggs’ lawsuits.

In her eight message string of tweets, posted from her personal @MaraElliott account, Elliott wrote “This is false” and again repeated her claim that Briggs sued her “three times“. Elliott also made the claim that “La Prensa knows all this since Cory Briggs is on their payroll (he’s their attorney), though they conveniently left that part out.”

The article last week did included a notice that disclosed that Briggs has and continues to represent La Prensa San Diego in cases to enforce public disclosure laws when public agencies refuse to release documents as required by the California Public Records Act and the Brown Act.

But Elliott’s claim that La Prensa San Diego has Briggs on “payroll” is completely uninformed and false. Briggs and his law firm are not, and have never been, on LPSD’s payroll or been paid any money by LPSD directly. Briggs and his firm are paid by government agencies after proving that they violated the law by failing to disclosure public documents, as was the case when a Prensa San Diego sued the City of San Diego in 2019.

The City of San Diego issued a check to Briggs Law Firm Trust for the legal fees awarded by the Court. []

FULL DISCLOSURE: Briggs has represented La Prensa San Diego and its Publisher in various actions to enforce public disclosure provisions of the California Brown Act and the California Public Records Act, including two pending lawsuits against the City of San Diego for failures to release documents related to the 101 Ash St building, as well as documents related to a secret committee that funds police equipment.