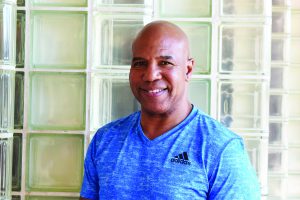 While many try to reach their goals by changing the way they do things to better fit in or to be noticed, others instead choose to focus on doing things the right way and staying true to their goals on their own terms.

Paul “The Ultimate” Vaden knows all about reaching his goals by staying true to himself. Despite being criticized for his lack of an extroverted public persona and being “too nice” to fight, he racked up a professional boxing record of 29 wins and three loses, laying claim to the IBF Middleweight Championship in the process — making him the only San Diego native to be crowned by a major boxing organization.

Vaden shared that the moment that put him on his road to success was when he first saw boxing legend Muhammad Ali on TV. At that moment he knew he wanted to be a boxing champion, dedicating all of his efforts towards his dream.

“I wanted to be him, but I did not have anything that would make you think I was going to be a boxer,” Vaden shared.

As he shared with La Prensa San Diego, Vaden began learning how to box at the Jackie Robinson YMCA when he was just eight years old, this while the other kids his age were in the playground.

“It was the summer of 1976, so while kids were in the summer camp, you could find me working out at the gym by myself and I would go back again in the evening because once I got started I was religious about it,” he said.

In his first amateur bout, the future world champion was defeated by the judges’ decision. While many would have given up after their first loss, Vaden did not desist and within a month lifted his first tournament trophy.

To this day, he still holds on to his first-ever trophy out of personal significance.

“It speaks of hope, resilience, and the future. It gave me a sense of belief in what I could accomplish,” Vaden explained.

It is those values and confirmation he had the talent to succeed which took him through his boxing career, overcoming both favored rivals and overly-critical pundits. 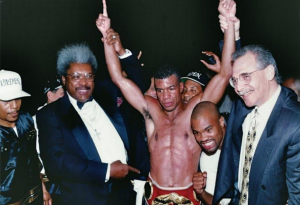 “When I won the championship in 1995, I was a 3.5-to-1 underdog and people said I was ‘too nice’ to be a champion; winning was the best way to jab back at the critics,” he said.

As someone who reached his goals his way, Vaden now looks to motivate and inspire others by instilling a sense of belief in those who hear his stories and advice.

Today, as a motivational speaker and consultant, Vaden takes examples from his life and the world of boxing and presents these to anyone from high-ranking corporate groups to kids at youth camps.

“No one is immune to my message, the message is universal. But I feel that it’s just as important, if not more, to speak to the youth,” he stated.

As proof that one has to truly believe to achieve, Vaden also insists that one must love what they do, or try to do.

“Everything that I do I love, but sometimes you hear people say ‘oh gosh’ when they have to do something important and I don’t think that way because if you don’t love what you do there are ways to enable you to appreciate what you might not like,” he shares.

As part of his speaking engagements, Vaden will be addressing business leaders at this Friday’s yearly summit held by the South County Economic Development Council, where some of the county’s most prominent leaders gather.

“This has actually been on my calendar for quite a while and they have well over 500 business owners and similar people coming together for this summit and truthfully I am very excited to share some inspiration and to talk about how to overcome anything.”