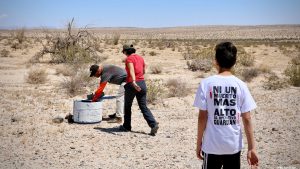 The Water Stations Project, which consists of leaving water jugs at sheltered sites where immigrants crossing through the desert can find them, is turning 20 this season.

As they have done since 1999, the group has started taking water jugs to potential immigrant corridors in the Yuha desert in Arizona, northwest from there, and in the Anza-Borrego desert, where the land is so barren that it acts as a deterrent for immigrants, so much so that instead of a wall, there is only a structure reminiscent of a landing barrier.

Pedro Rios, Director of the American Friends Service Committee in San Diego, joined the most recent group of volunteers and told us the project is carried out from March to October each year. It was started by Laura Celina Hunter and her husband, John Hunter, at a time when Operation Gatekeeper in San Diego forced immigrants to cross the border at ever-more remote and inhospitable places, such as the desert and the All-American Canal, and many of them dying in the process.

The fact that the humanitarian project – which has been shown to have saved many lives – was started by John Hunter has always raised some eyebrows, given that his father, former Congressman Duncan L. Hunter, at some point proposed using anti-personnel mines along the border, and that his brother, current Congressman Duncan D. Hunter, is following his father’s anti-immigrant footsteps.

This is the first year that the Hunters will not be directly involved in the project, but they are still helping coordinate it.

The project consists of about 65 stations placed throughout the desert at locations where for different reasons volunteers believe could be where immigrants pass through. Temperatures in these desert areas can reach as high as 120° Fahrenheit.

At each station, volunteers leave several one-gallon water jugs inside plastic drums covered with wood. Next to them, they place 15-foot-high poles staked into the ground with orange and blue flags attached to the top, so they can be seen from a distance.

Within National Parks, the Federal Bureau of Land Management (BLM) prohibits the volunteers from using the poles but allows them to use brightly-colored drums (such as orange and bright green) to the immigrants can see them.

Rios indicated that he did not know whether the permit granted by BLM somehow protects the volunteers, but the project is about to celebrate 20 years without Border Patrol opposition.

“There is a basic exchange of information with Border Patrol,” said Rios, “such as asking whether any immigrants have been found dead recently in the area or if forecasts call for higher temperatures.”

During the last outing nearly two weeks ago, volunteers replaced 12 one-gallon water jugs: some because they were damaged, but others because someone had taken them. The volunteers believe it could have been immigrants who found the water and took it with them on their journey.

If you would like to get involved in the Water Station projects, additional information can be found at: waterstations.org, or by contacting Celina Hunter at (619) 318 0371.