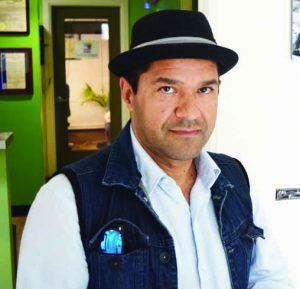 Being able to express an idea without a single word or bringing to light that which cannot be seen at plain sight is a talent not many people have. These are ways in which local artist Ramon Sandoval expresses himself.

“Expressing something which is hidden is something that has to rise up, something that you don’t know what it is until you have a reaction,” Sandoval shared with la Prensa San Diego.

The work of this local artist ranges from photography to collage to sculpture with reclaimed materials and addresses concepts such as culture, mysticism, and nature.

The path which lead Sandoval to art is one which full of difficult experiences.

Born in Guadalajara Mexico, Sandoval first arrived to the United States when he was 14 years old. After many occurrences which took him back and forth across the border numerous times, Sandoval fell victim to a cousin involved in human trafficking, lived with a group of homeless youth, and was exposed to drug addiction at an early age.

After a harsh year, Sandoval was reunited with his brother who took him into his home and got him a job at a restaurant so that he can become independent.

After several events in his personal life, Sandoval arrived in Tijuana at the end of the 90s and began taking art classes at the Taller Pastrana workshop, learning how to paint from artists Miguel Angel Ortiz and Linda Moreno.

“That is where I really got to know art,” said Sandoval, who was already making pieces with items he found along Rosarito beach at the time he enrolled.

Over the course of many years, Sandoval became involved in the local faith community and in supporting those in his community who needed a helping hand. He also chose to reinvent himself by creating art in different media and with different techniques.

Common motifs in his work are freedom and everyday life in natural or mystical settings.

These are clear influences in his latest exhibit, titled “Taboos Reframed.”

The portraits which make up this exhibit, held this past June at San Diego LGBT Pride’s gallery, depict Latinos in an everyday setting, without any shame or remorse, highlighted cultural diversity in the community and personalities which are often hidden.

This collection depicted Latino individuals who are involved with the LGBT community and support sexual diversity, although they themselves may not identify as LGBT. Each portrait served a study of each subject in which their attire, estimated age, time of day, and expected social roles all played a part.

“This is like telling a story,” said Sandoval. “We have among our models an 18 year old girl, a young zapatista man who is 29, a woman over 60, and another older woman.”

In this exhibit ideas such as loneliness in the face of empty space, youth imposed over maturity, and the conjugation between self esteem with sexuality were explored.

In this same vein, Sandoval explores shamanism as a form of self-healing and as a form of exploring the very Catholic environment in which he grew up in.

“It is something that was always around me because of my mom and my family,” he said. “In (Southern Mexico) people do cleansing rites with herbs despite being very Catholic and there is like another identity which can’t be seen but exists —it hides— and people go to mass on Sundays but secretly have a cleanse on Wednesday.”

Sandoval is currently focusing his efforts on his next project, a yearly Dia de los Muertos altar which he plans on setting at a local community center.

“This project will be a bit more open to the community and we invite everyone to bring their photos (of loved ones who have passed away) and we can also print photos and put them on candles so that we light them at the altar,” Sandoval said.

Previously Sandoval has held Dia de los Muertos altars at the Campo Santo cemetery and the Explanada in Old Town, as well as First Methodist Church in Normal Heights and the San Diego LGBT Pride gallery.

Sandoval is a resident of Normal Heights and lives with his husband Hugo and their two dogs.