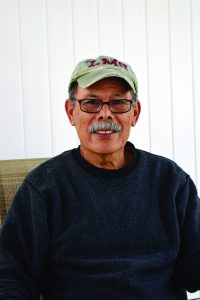 Born in 1943 in the village of Nio, Sinaloa, Salvador Barajas is a local artist who has devoted his career to creating works of art for various patrons in San Diego and Southern California.

Barajas shared with La Prensa San Diego that his family came to Tijuana in 1944.

“I lived in Tijuana until my first year of high school in 1961. My father, who was already in the United States legally, brought me to San Diego,” recalls Barajas. “After a while I became a volunteer with the United States Air Force in January 1964.”

While at the Air Force, Barajas worked in a warehouse, but later became a technical illustrator, where he implemented his artistic talents professionally. This position also lead him to obtain his U.S. citizenship in order to handle classified materials and highly protected information, access to which requires U.S. citizenship.

Upon leaving the Air Force in December 1967, Barajas used his G.I. Bill benefits to attend the Los Angeles Trade Technical College, where he graduated in 1970 with an associate’s degree in commercial art.

“Then I came to San Diego State University for my bachelor’s degree,” said Barajas.

After receiving his four-year degree in art, Barajas began working in advertising for agencies, art studios, and several clients in different business sectors. At this stage of his career he had already refined his graphic design skills and learned the finer points of being an art director.

“In 25 years in this profession I learned a lot,” Barajas reflected. “I learned so much that my last position as a commercial artist I was the senior art director as well as one of the two executive designers for The Hahn Company.”

Barajas has been retired from the world of corporate art for more than 12 years now. He currently focuses his work to community spaces, painting pieces the artist describes as “incredible.”

“Since retiring from commercial art I’ve worked in places like Chicano Park, I have worked with César Chávez Service Clubs, Urban Corps, and I have also done murals for county libraries and schools”, Barajas detailed.

Despite focusing on projects within the community at this stage of his career, Barajas has already had a strong track record in San Diego’s public art history.

In 1973, Barajas was part of the group of artists who painted Chicano Park’s first two murals, located on the Coronado Bridge’s exit ramps to the I-5 South and Barrio Logan’s National Avenue respectively.

“Many things happened in the ’70s and the Chicano movement was very active back then,” Barajas said. “I was studying at SDSU and one day someone asked about a protest. We ended up in the park and began to paint in two ramps of the bridge.”

In 2012, almost 40 years after the first murals were painted at Chicano Park, the Chicano Park Steering Committee received a grant of $1.6 million to restore the oldest murals of this public space, which were in terrible condition.

The restoration of these murals was very close to being put up for licitation companies outside Barrio Logan until Barajas presented a proposal to Caltrans.

“I took to making the technical manual to restore the murals. In fact, I presented a prototype of the manual to Caltrans representatives and their mouth dropped,” Barajas recalled.

Barajas, along with four of the original artists were commissioned to restore the murals of Barrio Logan. All work done on these outdoor paintings was carried out under Barajas’ technical guide.

This year, Barajas picked up his brush at Chicano Park once again. Earlier this year he painted a new mural, which disapproves of the border wall, which was officially unveiled in mid-April.

“Ten years ago the founder and director of Border Angels wanted a mural about this issue painted, but at the time there were no resources.”

This year, Border Angels managed to raise the necessary funds to finance the work. It took Barajas about a month to complete the painting.

“It feels very nice to come back. I can now paint this mural better than when I was a student at SDSU in 1973,” Barajas said in relation to the opening of his latest mural. “I am now an art professional, and you can see the difference in my work.”