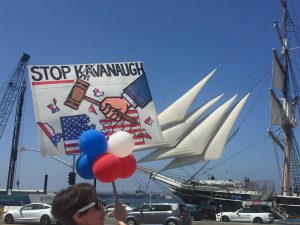 Standing in front of a large crowd gathered outside the San Diego County Administration Building in downtown last Sunday, immigration attorney Dulce Garcia said, “I can’t fix my own papers, I’ve been here undocumented for 30 years, but I haven’t lost hope.”

Garcia, also one of the directors of Dream Act-recipient advocacy group San Diego Border Dreamers, was one of several speakers gathered raising questions about the nomination of Judge Brett Kavanaugh to the Supreme Court.

The gathering was part of a national day of action in all 50 states with similar events held across the country and in San Diego with thousands reportedly gathered nationwide to show their opposition against President Trump’s Supreme Court nominee.

Garcia is also one of the main plaintiffs in a lawsuit against the Trump administration over the end of the Deferred Action for Childhood Arrivals program (DACA) and is also worried about the impact Kavanaugh’s nomination would have on the lawsuit if it made its way to the Supreme Court.

Garcia explained the case is one of five DACA cases across the country, and there are other cases important to the greater Latino and Chicano community that could also eventually go before the Supreme Court.

“We are very concerned about this nomination. This lawsuit against Trump represents the hopes, lives and livelihoods of 800 DACA recipients maybe more,” Garcia told the crowd.

Garcia added, “Kavanaugh is too in bed with President Trump, and his connection to the Trump administration makes him a source of terror for the immigrant community. To have somebody that’s going to be possibly advancing the president’s anti-immigrant agenda is very concerning.”

President Trump has said Judge Kavanaugh has impeccable credentials, unsurpassed qualifications and a proven commitment to equal justice under the law.

There is also concern the nomination is being rushed because senators won’t have access to his complete record during the nomination hearings. The National Archives is said to have millions of documents related to Kavanaugh’s time with the government, but earlier this month it said it would not be able to finish reviewing the documents until the end of October. The nomination hearings are set to begin September 4, 2018.

Some of the documents that have already been released have raised fears over how Kavanaugh would approach the law.

This month news outlet The Hill reported in a recent call with reporters, that president and general counsel of the Mexican-American Legal Defense Fund Thomas A. Saenz said, “It is imperative that every nominee to serve as a justice be completely vetted for their understanding of the Latino experience with discrimination in the United States.”

“We believe that Kavanaugh will be a staunch defender of constitutional liberties, will keep government power in check and will not create new laws based on political pressure,” said Daniel Garza, president of the Libre Initiative.

Issues affecting the Chicano/Latino community are just some of the issues on the line with Kavanaugh’s nomination.

Some are also concerned about how Kavanaugh would approach impeachment proceedings of a president. Kavanaugh once wrote, “We should not burden a sitting president with civil suits, criminal investigations or criminal prosecutions.”

On the same Sunday as the protest in downtown, over at the Blind Lady Ale House in the Normal Heights neighborhood several other people were gathered not for drinks, but to fill out postcards expressing their concerns about those very issues including their opposition to Kavanaugh’s nomination.

Cynthia Knoop with Indivisible San Diego Central, a local chapter of Indivisible, an organization dedicated to resisting the Trump agenda, organized the Resistance Postcard Party and is planning several other postcard parties and wants to see more people of color involved.

Some postcards were sent to members of the Senate who Knoop said could make or break Kavanaugh’s nomination. They include Republican Lisa Murkowski from Alaska, Republican Susan Collins from Maine, Democrat Heidi Heitkamp from North Dakota, Democrat Joe Manchin of West Virginia, Democrat Joe Donnelly from Indiana, and Democrat Doug Jones from Alabama.

Knoop created a postcard she said is being sent to Kavanaugh himself. On the front side it read, “The scale of justice must be unbiased and balanced. Withdraw your name, Judge Kavanaugh.”

On the back side it read, “The majority of Americans support Roe vs. Wade and the right to choose, we want affordable healthcare and environmental protections, we want the rule of law upheld, we do not want your extreme right-wing agenda in our Supreme Court, withdraw your name from consideration for justice of the Supreme Court.”

“I think he needs to know how the American people really feel about his nomination. The majority of us aren’t happy. We don’t want his extreme agenda in our courts for the next 40, 50 years. That’s going to affect our children and our grandchildren,” Knoop said.