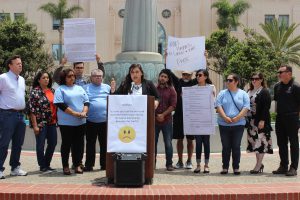 San Diego leaders, activists and workers gathered to protest against Walmart, which sold an old store location that has been used for months now as a detention center for children after being separated from their migrant parents at the south border.

The protest, was held outside the San Diego County Administration building Wednesday, June 20.

It was motivated by photographs, videos and audios of children that were separated by immigration authorities from their parents upon their arrival to the country to ask for asylum, circulated on the news outlets and social media. Leaders, public officials, celebrities and the community were outraged by this immigration policy.

The Employee Rights Center, Making Change at Walmart (MCAW), and community activists held several protests in different cities including in San Diego to draw attention to the company that sold a building that is currently used as a detention facility for immigrant children, after being separated from their parents upon their arrival to the country.

The building is located in Brownsville, Texas, and Walmart sold it in 2016, for supposedly $4.5 million, according to documents exhibited by the MCAW.

“We discovered the sale documents of one of Walmart’s properties to Southwest Key, a non-profit that operates detention centers for immigrant children,” said the protest organizer, Karen Rodriguez. “Walmart is now saying they didn’t know their property would become a children detention center, but we have the documents that prove they knew who were they selling to. They have a big team and a lot of resources, so we don’t believe that they didn’t know what the building was going to be used for.”

For the building to be sold, the contract specified different policies, like not making the facility into a new store, not make the building into a bar or nightclub, or even an adult store.

“If they have those restrictions, we are asking them to include on their list, that their properties can’t be turned into a children or family detention center, we want them to stop making money for the separation of families,” Rodriguez added.
The protest held on Wednesday, was one of the many movements and rallies held this week in San Diego by different organizations to ask the help of public officials and Trump’s administration to stop the separation of migrant families.

“We need to highlight that migrant families are not only being separated at the border but also within the state lines,” said Ali Torabi, an activist and DACA recipient to La Prensa San Diego. “Our repugnancy against this degrading policy is making us unite as a community, and is making us move forward. We demonstrated it today with this protest, and in all the rallies held this week.”