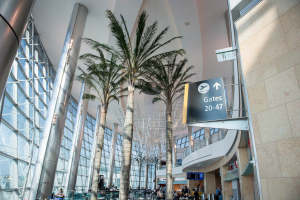 Of the 24 million passengers, more than 1 million were international passengers – a 19 percent increase over 2017. That is also a record for the airport, according to a new airport report.

In addition to a strong economy and robust tourism industry, several factors contributed to the increase in 2018, including Air Canada adding a third daily flight to Vancouver; Lufthansa beginning service to Frankfurt; Japan Airlines flying a higher density aircraft and operating at one of the highest load factors of any mainland U.S.-Tokyo flight in their system; Edelweiss carrying 49 percent more passengers to Zurich in 2018 than they did in 2017; and Southwest adding Puerto Vallarta service in 2018 and increasing service to Cabo.

“This is a tremendous time of growth for not only SAN but the entire San Diego region,” said airport president and CEO Kim Becker. “With more people choosing San Diego as their destination of choice, we are looking ahead at projects to accommodate this trend and provide the world-class airport experience our customers and community deserve.”

SAN is on course to serve more than 25 million passengers next year. To accommodate recent and projected increases, the airport’s next master-planning phase, the Airport Development Plan (ADP), is under way. The centerpiece of the ADP is the replacement of 51-year-old Terminal 1 with an attractive, modern and more efficient terminal that will enhance the overall airport experience.

This year, the San Diego International Airport together with San Diego Mayor Kevin Faulconer and regional agencies led by SANDAG, will address the long-standing issue of forging a better public transit connection to the airport.

The San Diego International Airport was founded in 1928, and today it’s the busiest single-runway airport in the nation. There are 51 gates in Terminals 1 and 2, with a new Terminal 1 slated for 2022, while Terminal 2 became the first LEED Platinum certified airport terminal in the world in 2013.