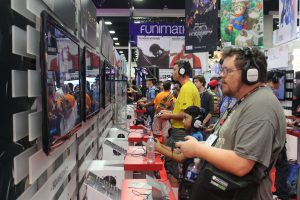 Conferences, workshops, exhibits, and panels related to everything in comic books and the popular arts will pack the San Diego Convention Center as part of San Diego Comic-Con.

This event returns to downtown in its 49 edition from July 19 to 22.

Comic-Con is San Diego’s largest convention with more than 135,000 attendees and attracts thousands of visitors who want to be in the middle of the world’s premiere celebration of the popular arts. The event has an estimated economic impact of $135 million.

Comic-Con main activities are located inside the San Diego Convention Center, including a large exhibit hall and conferences, but due to the production size outsizing the 60,000-square-meter facility activities are also hosted at nearby venues.

Comic-Con celebration begins with Preview Night on Wednesday, July 18, and runs until Sunday, July 22.
Since recent years, the most anticipated presentations at Comic-Con are the panels for of large Hollywood production companies like Warner Brothers, Marvel Studios, and 20th Century Fox. These companies share special features and video clips about their newest productions including the whole cast and production crew.

This year, Marvel Studios will skip their panel presentation at Hall H for future titles like “Captain Marvel,” which has been set for release in 2019, and “Avengers: Infinity War part 2.”

However, action movie enthusiasts will be able to watch a sneak peek of films like “Aquaman” and “Wonder Woman 1984.”

This year, television show panels like “The Walking Dead” and “Supergirl” will also return to Comic-Con, which will include the presence of their main cast and production crew. Some of the TV series that will skip this year’s Comic-Con include HBO’s hits “Game of Thrones” and “Westworld.”

One TV show that was very well received by Comic-Con attendees during its run was “Breaking Bad,” which finished airing in 2013. This year, their crew and cast will return to San Diego for a special 10-year anniversary reunion in Hall H.

And, like every year, Comic-Con attendees will have the opportunity to watch sneak previews about new TV shows like “Castle Rock,” “The Purge,” “Deadly Class,” and many more.

All Comic-Con pass holders will receive a limited edition bag filled with three publications by Comic-Con including a souvenir book, an events guide, and a quick guide that includes information about all the locations besides the San Diego Convention Center that have activities part of this event.

The complete guide with schedules about the different conferences and activities are now available at www.comic-con.org.

The community is invited to enjoy the outside of the San Diego Convention Center during Comic-Con to enjoy activities and experiences that don’t require a Comic-Con badge. Companies like Amazon and Adult Swim organize these outside activities.