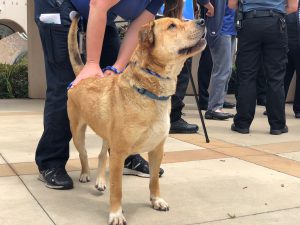 The San Diego County District Attorney’s Office seeks to better defend those who cannot defend themselves through the creation of a unit specializing in animal cruelty cases.

In the past four years, the DA’s office has prosecuted nearly 250 animal cruelty-related cases. To further this work, the new Animal Cruelty Prosecution Unit will work closely with law enforcement and animal advocacy groups to investigate these crimes.

“Animal cruelty can be horrific. It is also one of the earliest and most dramatic indicators that an individual may be developing a pattern of seeking power and control through abusing others,” said DA Summer Stephan. “When animals in a home are abused or neglected, it is a warning sign that others in the household may be in danger.”

Several studies in the United States and abroad have linked animal abuse with other violent crimes. According to statistics shared by the DA’s Office, it is estimated that 70 percent of the people they prosecute for other crimes have a record of animal cruelty and 13 percent have a history of domestic violence. Statistics also show that 43 percent of school shooters have animal abuse in their background.

San Diego authorities ask anyone who knows or suspects animal cruelty to report it, because it not only protects these helpless animals, but could also lead to discovering other abusive behavior by the perpetrator.

Dan DeSousa, director of the County of San Diego Department of Animal Services, applauded the initiative, expressing that it is an important step in holding people accountable for their actions.

“The District Attorney’s Office will now help protect those without a voice, namely the animals in our communities,” said DeSousa.

Deputy District Attorney Karra Reedy has been assigned to lead the Unit, whose work is already underway. One of its most recent cases has been the prosecution of a couple who had 92 Yorkshire Terriers stashed in a house under unsanitary conditions, and another 48 at a second location within the county.

San Diego authorities are in favor of proposing a bill that would establish a state registry for animal cruelty offenders to keep them from having contact with animals in the future. Several other states are studying similar registries.