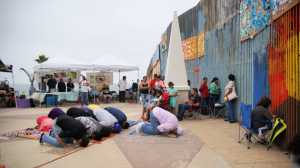 A group of Muslims from San Diego joined the Border Church, that meets every Sunday in the Friendship Park between Imperial Beach and Tijuana Beaches, as a gesture of unity and peace.

Some of the Muslims stated that they chose to cross the border and join the Christian parishioners on the Mexican side of the border because it reinforces a feeling of unity.

Sonia García, of the Latina Muslim Foundation of San Diego, said in Spanish that, “when we stop judging and pointing each other out, regardless of religious beliefs, skin color, or our origin, we are unity that means the collapse of any wall”.

The Islamic group caught the attention of passers-by who were heading and returning from the Tijuana beach.

The visit to Christians on the Mexican side takes place at a time when United States President Donald Trump toughens his comments against foreigners and Americans of ethnic minorities.

Muslims refrained from mentioning the president, but they did criticize migration policies that make it increasingly difficult to apply for asylum.

The regional director of the Council of American Islamic Relations in Southern California, Dustin Craun, said that the last time the Muslim group was in Tijuana, they observed that a couple of migrants crossed the border with the intention of surrendering to patrollers to request asylum in San Diego.

“But a young woman was made to sign a document that she did not understand, with which she agreed to be deported,” Craun said.

The Muslim group later learned that the husband had been accused of trafficking in undocumented immigrants, for having passed with his wife, and that he continues in a detention center where he faces the charges.

For her part, the young Muslim Mayté Gutiérrez explained that for her foundation in San Diego it is “essential that our community understand what is happening at the border and how it is not alien to us”.

The group is trying to install a shelter for migrants in Tijuana and now develops a plan to raise funds in San Diego and Los Angeles.

Even when seeking information on where to install the eventual shelter, the group has found that at least five Muslims have requested shelter in Tijuana centers. The most recent case was of three women who were received at the Agape shelter, on the outskirts of the city.

The Muslim group tries to participate in the Border Church ceremony on average once a month.

Pastor Guillermo Navarrete, who celebrates the joint ceremony from Tijuana on Sundays, said that from the Christian point of view it is always good to speak for unity, peace and understanding between diverse beliefs and cultures.

The Border Church has celebrated Christian mass ceremonies every Sunday for 11 years. It was founded by the Reverend John Fanestil of San Diego, who continues the weekly service.