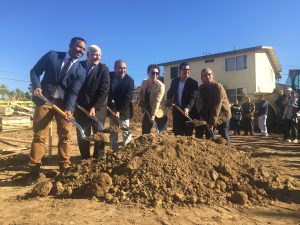 San Ysidro came one step closer to reaching a dream this week breaking ground on a new mixed-use project in the heart of the community.

At the groundbreaking ceremony all eyes were on a “floating church,” the original Our Lady of Mount Carmel Church which was raised up high in the air as part of efforts to restore it. The church, built back in 1927, is also the inspiration behind the project and one of San Ysidro most historic symbols.

“Casa Familiar acquired the property to save this building,” said David Flores, the Community Development Director with the non-profit Casa Familiar, who has been driving the project.

“This was the first home of Our Lady of Mount Carmel Church. We wanted to rescue it because of its significance as an icon in the community. The way that we are doing that is we raised the building 8 feet off of the original foundation. We are digging out the old foundation, digging out for a new basement and then the building will be brought back down.”

The project has been over 15 years in the making. Flores explained the financing for the over $9 million project was always difficult because it’s not a big housing project and because San Ysidro is an older neighborhood.

“I can’t believe today is here,” said Lisa Cuestas, Chief Executive Officer of Casa Familiar, before a large crowd gathered for the groundbreaking. Cuestas thanked a number of the project’s supporters, “We would not be here if it wasn’t for the small army of believers. Whatever you wholeheartedly believe in, that is what brought us here today.”

Named Living Rooms at the Border, the 13,469 square-foot mixed-use project includes a number of different components that could help give new flight to San Ysidro’s definition of “living.”

Once the church restoration is completed, it will become the new home of one of San Diego’s most beloved theatre company’s, Teatro Máscara Mágica, which will also include training for young people in theatre arts.

The County of San Diego provided over $100,000 for equipment for the project. County Supervisor Greg Cox, who was also at the ceremony, said the theatre component was one of several reasons he supported the project.

“Too often we hear negative comments about the border region. People forget San Yisdro is a bustling diverse community of working class families who work and deserve the same great quality of life experiences that every other community in this region seeks and desires,” Supervisor Cox said.

The project is also one of three locations in the region which will form a part of a new UC San Diego initiative to connect the university to surrounding communities by creating community stations. The goal will be to engage and connect UC San Diego’s faculty, students and research institutions with the unique culture and people of the San Ysidro/Tijuana border community.

The University of California San Diego’s Chancellor Dr. Pradeep Khosla also attended the groundbreaking and congratulated everyone on the new partnership.

About its significance, he said, “When I first got here seven years ago, one of the complaints I heard was you guys are up there on the beach, on the mesa, you don’t know what happens down here. When really I started coming to these communities, I realized that we really did not know what happened out here.”

Chancellor Khosla also said “Education, we know, is the greatest equalizer, but we know it doesn’t always work.” He added he sees the community stations, “Where the University is an equal partner with the community in causing change, making change, taking responsibility for all the changes we can cause. And that is very different from us being on the mesa. We want to be here where students live.”

Chancellor Khosla also thanked Teddy Cruz and Fonna Forman, of the internationally known architectural firm Estudio Teddy Cruz + Fonna Forman, who designed the project, and for coming up with the idea for the community stations.

One other component of the project is to inspire young people into entrepreneurship and into developing new skills. It will include a space for Casa Familiar’s El K-Fe Barista Youth Training Program, which is training the next generation of coffee professionals, and at the same time providing much needed specialty coffee in San Ysidro.

The project also addresses San Diego’s affordable housing crisis by proposing the inclusion of 10 units of affordable housing. Located less than one mile from the U.S-Mexico border, it will also have a space for immigration services in the predominantly Latino neighborhood.

“We are proud to be able to execute an innovative model that is inclusive of small economies that support community needs and much needed housing through a design that embraces San Ysidro,” Lisa Cuestas, Chief Executive Officer of Casa Familiar also said.