The highest-ranking City staffer at the time the 101 Ash building was evacuated in January 2020 has now admitted she leaked documents to a reporter while investigations into the controversial lease were underway.

Kris Michell, who served as the City of San Diego’s Chief Operating Officer from January 2018 to October 2020, testified under oath in a legal deposition on July 21st and detailed how she leaked City documents during the time she was involved in at least two investigations into the controversial building deal. 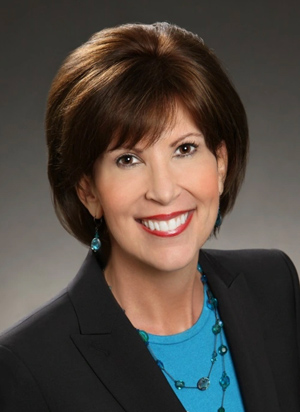 The City acquired the building in 2016 under a 20-year lease-to-own agreement, but was forced to evacuate nearly 1,000 employees in January 2020 after loose asbestos material was found throughout the 19-story office tower.

The building has remained empty since then and is mired in numerous lawsuits between the City, its landlord, Cisterra Development, and workers who claim damages from asbestos exposure and retaliation for speaking up about problems with the building.

Michell admitted this week that she met with then-NBC reporter Dorian Hargrove and provided him a copy of a confidential internal legal memo created by a law firm investigating the origins of the lease deal.

She admitted to meeting at a local Starbucks coffee shop with Hargrove to compare a version of a legal memo created by the law firm of Burke, Williams & Sorensen, LLP. The memo, known as the Burke memo, became controversial just months later when Hargrove used it as the basis of one of his news stories about the evacuated building.

City Attorney Mara Elliott and then-candidate for Mayor, Todd Gloria, both claimed at the time that the memo used by Hargrove contained a “fabricated” footnote that stated the Burke lawyers wanted to interview Gloria about his role in approving the lease deal in 2016 when he was on the City Council, but that Elliott’s office did not make him available.

“Mr. Gloria had previously been skeptical about the lease-to-own structure when it was used for a prior acquisition, but was supportive of the 101 Ash agreement,” the footnote in the Burke memo allegedly read. “The discussions during the update could be informative about why the City went forward with the transaction despite the unfavorable language in the Lease Agreement, the due diligence materials available to the City, and the substantially higher cost of the lease-to-own structure. However, we were unable to obtain the City Attorney’s approval to interview Mr. Gloria or his staff,” the footnote concluded.

As the controversy over the authenticity of the memo grew, Hargrove defended his use of the documents by saying he had obtained a copy of it, along with two other internal memos, from an anonymous source, but that he had confirmed the document with a high-ranking and knowledgeable City source. Hargrove has never disclosed the name of his second source.

Hargrove also said that, when pressed to confirm the legal memo after Elliott challenged its authenticity, his second source backed away and said the confirmation was a “miscommunication”.

Without the confirmation, NBC then decided to retract the part of Hargrove’s story that relied on the disputed footnote.

After the retraction, Elliott called the story “bogus” and that NBC had used a “fabricated document” as the basis for its story, although no one at the City admitted at the time that several versions of the Burke memo existed. Michell testified that she was not sure if the version she gave Hargrove contained the disputed footnote.

Michell also testified this week that she destroyed documents in her office as she was preparing to leave in September 2020, including admitting that there were several versions of both the Burke memo and another internal legal memo prepared by the law firm of Hugh Parker LLP.

The existence of various versions of the Burke memo were also confirmed by City staff in response to a California Public Records Act request filed in September 2020 just after NBC's story first ran.

City revealed that they had “original or edited” versions of the Burke memo, but would not release the documents because they are protected by attorney-client and/or attorney work-product privileges.

“Per City Attorney’s Office, the actual memo/report provided by Burke Williams Sorenson is privileged in its original or edited version. Please keep this in mind as you review any responsive records for this request,” an internal staff message revealed in the CPRA request. Those internal comments are not usually released to the public.

La Prensa San Diego later confirmed that Elliott’s office had access to and assisted in editing multiple versions of both the Burke and Parker memos.

In January 2020, just days after the 101 Ash building was evacuated, Michell testified before the San Diego City Council that the City would “perform a forensic analysis” of the toxic building.

“We are in the process of hiring a forensic consultant on an emergency basis and as a top priority to perform a forensic analysis of what went wrong on this project. Simply, who knew what and when, and who has the obligation to assist us in solving this problem,” Michell said on behalf of Mayor Faulconer during a January 28, 2020 Council meeting. 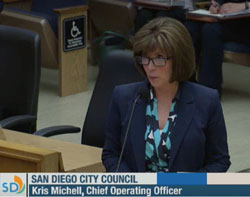 Six months later, Mayor Faulconer’s office released the Parker report on July 28th as an “independent review” of the controversial purchase of the 19-story office building known by its address at 101 Ash Street in downtown.

At the time, Faulconer claimed the report was “independent” and that he was releasing it as a change from the City’s past “culture” of “sweeping problems under the rug.”

Michell then presented the Parker report at the August 6, 2020 public meeting of the City Council as “an unvarnished accounting” of the 101 Ash debacle.

“This project has been fraught with challenges over the past four years, and given the taxpayer dollars involvement [sic], the public expects and deserves an unvarnished accounting of how we got here,” Michell said during the meeting. “Mayor Faulconer called for an independent review of the Ash Street project to determine what happened and this January you authorized Hugo Parker and other firms to investigate any and all aspects of the project for a full public accounting,” Michell said. 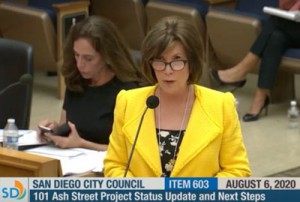 But Michell did not disclose that the Burke law firm had also completed a review of the project and that its lawyers had questions about how and why the City used a lease instead of purchasing the building directly.

After NBC retracted parts of Hargrove’s story, he was temporality suspended from his duties at NBC, but later returned to work but was not assigned to work on issue related to city government.

On September 20, 2020, Michell announced that she would be resigning effective October 2nd. Michell had previously served as Chief of Staff to Mayor Jerry Sanders and Mayor Susan Golding.

In May 2022, Hargrove began in his current position as a news producer with CBS 8 San Diego.

The City never released any copies of the Burke memo, but La Prensa San Diego published copies of two versions of the memo in an October 11, 2021 story.

OTHER LEAKS OF 101 DOCUMENTS

During her deposition this week, Michell also admitted she met with local attorney Cory Briggs around the same time she met with Hargrove, and that she provided copies of City documents to Briggs as well.

Michell testified that she reached out to Briggs because he represented whistleblowers involved in other controversial matters, but she did not clarify whether she engaged Briggs as her attorney. Michell also detailed that she only provided Briggs with physical copies of documents, not any electronic versions.

At the time, Briggs was a candidate for City Attorney against incumbent Mara Elliott.

Reached for comment after Michell's deposition, Briggs said he could not confirm any conversations he may have had with prospective or actual clients.

Lawrence Shea, another lawyer involved in cases related to 101 Ash, told La Prensa San Diego that he plans to subpoena Michell for a separate deposition in his cases, some of which involve workers who were exposed to asbestos during the remodeling work and occupation of the building before it was evacuated in January 2020.

As COO, Michell signed an employee memo in January 2020 that directed the evacuation of the 101 Ash building after the San Diego County Air Pollution Control District had cited the building as a public nuisance due to the loose asbestos material.