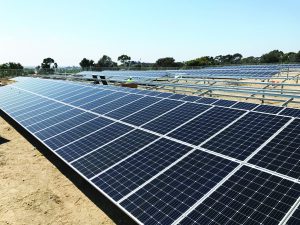 The report, published last week and taken offline the next day, analyzed SYSD’s activities and contracts from 2012 through last year. Among the subjects of this fiscal review were the use of bond funds and the approval of a solar energy contract.

Two former School Board members and a local businessman contacted FCMAT this week to dispute the report’s findings, and have offered information challenging the report’s conclusions.

The report alleges that the solar energy company’s president, Art Castañares, allegedly made contributions to political campaigns of two board members. Castañares is also the publisher and CEO of La Prensa San Diego.

Specifically, the accusations against Castañares claim he may have used the San Ysidro Education Alliance, a teacher’s political action committee (PAC), to direct contributions into the November 2014 campaigns of Marcos Diaz and Rodolfo Linares in exchange for their support in reinstating the solar energy project in 2015.

“These allegations are completely false because I never gave any money to any of those San Ysidro campaigns or to the PAC,” Castañares said in an interview this week. “I have already testified under oath before a grand jury and denied the vicious rumors under penalty of perjury.”

The report cites interviews with unnamed sources alleging that Castañares agreed to provide campaign funding in exchange for Diaz’s and Linares’ support of reinstating the solar project Manzana was developing. The contract was voted at a board meeting on April 9, 2015 by a unanimous 5-0 vote.

La Prensa San Diego tried to contact Martin Galante of the San Ysidro Education Alliance to verify the reported claims earlier this week. Galante returned a call on Friday, May 17 to state the claims made in the report are untrue.

“Every penny we receive comes from individual teacher contributions and a small part of the dues taken from each member’s check,” Galante explained. “The claims Mr. Castañares coordinated contributions to us are 100 percent false”.

After the report was released last week, Castañares contacted FCMAT to object to the report’s conclusions, and complained that he had never been interviewed to provide information for the report. During a call last week with Michael Fine, FCMAT’s executive director, Fine offered to pull the report from the agency’s website and to review information submitted by Castañares.

“Your report carries the credibility of the State of California, and is viewed as an official document, and your published findings based on rumors, allegations, and supposition creates a false impression of criminality without allowing me the opportunity to defend myself, provide exculpatory evidence, or to challenge the claims,” Castañares wrote to FCMAT.

“I ask that your office review the source information and also seek more complete information to give you a more accurate accounting of the actions related to my dealings with SYSD,” Castañares continued in his message.

Linares and Diaz also submitted their own complaints to FCMAT this week objecting to being including in report’s misleading allegations.

“I was never asked about these allegations by FCMAT when they interviewed me, and I would have denied them if they had asked me,” Linares said the week. “These are based on rumors and none of those false statements about me were made in a sworn statement or under oath so they shouldn’t be used at all.”

According to Fine, FCMAT did not receive any sworn statements or legal affidavits to back up the claims, but only relied on interviews with yet unnamed individuals. FCMAT did not contact or interview Castañares for the report.

The FCMAT report does not definitively conclude that any criminal acts actually happened, but it raises the issues and suggests that the matter be further investigated by the District Attorney’s office.

Several individuals connected to San Ysidro School District were already interviewed by a grand jury back in October 2018 when the District Attorney’s office conducted an investigation of the District. Those interviewed included Castañares, Linares, Diaz, and Edward Velasquez, former SYSD interim superintendent who also later served as superintendent of the San Diego County Office of Education.

“I was asked point blank if I had received any money or campaign contributions from Castañares and I answered under oath that I had not, “ Diaz said this week.”I don’t know how people can just make up these rumors and anyone takes them seriously.”

A review of official campaign disclosure forms for Linares, Diaz, and the San Ysidro teachers’ union political action committee confirmed that no contributions were given to any of them by Castañares or anyone associated with him or his business. There are no documents that support the allegations that he made any campaign contributions to any SYSD candidates, board members, or PAC.

Castañares also disputed the allegations that there was any pay-to-play arrangement with any board members.

“Further, your accusation that I had an agreement to support board candidates in exchange for support of my project is entirely false,” Castañares wrote in his letter to FCMAT. “There was never any discussion or arrangement with anyone for any quid pro quo deal.”

The report’s allegations of corruption were especially concerning to Castañares because he says has fought the District over his own claims of corruption since 2011.

The solar energy contract was first approved by SYSD in 2008, but later terminated in 2011 after Castañares refused to give a bribe to then-School Board member Raquel Marquez-Maden.

Castañares alleges that Marquez-Maden’s husband, Gareth Maden, asked Castañares to buy a home for the couple within the SYSD boundaries. After Castañares refused, the Board voted 5-0 to cancel the contract, with Marquez-Maden voting in favor of the cancellation at the urging of then-Superintendent Manuel Paul. Paul was later convicted of extorting cash from another contractor, and was sentenced to 60 days in federal custody.

Castañares’ company then filed a lawsuit to reinstate the contract and, after a three-year legal battle, the company won a $13.6 million judgment. After the lawsuit, the two sides agreed to a mediated settlement that included amending the existing contract to fulfill the solar project, amd the company forgave the court judgment.

“All we ever asked for was that our contract be honored,” Castanares said. “The District tried to wrongfully cancel it but the jury saw that we had been the victims of a breach of contract,” he added.

Marquez-Maden left the school board in 2012 after it was revealed that she and her husband had not lived within the boundaries of the school district, thereby making her ineligible to serve on the board. She had already served more than five years while living outside of the district, using her mother’s home in San Ysidro as her residence address.

Marquez-Maden last year served as a campaign spokesperson for the City Council campaign of Antonio Martinez, who has served on the SYSD board since 2012. Martinez lost that campaign and remains on the SYSD board through the end of his current term in 2020.

Gareth Maden recently served as a paid campaign consultant for Rudy Lopez, Jr. who won election to the SYSD board in November 2018. Lopez and Humberto Gurmilan were both elected to the Board in November, joining Irene Lopez, Rosaleah Pallasigue, and Martinez.

“I believe that many of the same players that have controlled the San Ysidro school district for years are behind these rumors in order to get back at me for uncovering their illegal activities,” Castañares said this week. “It’s a shame that they use the District for their own personal and political gain at the expense of the students and families in their own neighborhoods that they claim to want to help,” Castañares concluded.

The FCMAT report has now been sent to the San Diego County Office of Education which commissioned the report. The County Board of Education will decide whether to forward the report to the District Attorney’s office for further investigation.

“I have sent a letter to the County Superintendent and County Board members expressing my concerns with the report’s flawed conclusions,” Castanares added. “I hope they review the report’s underlying evidence or lack thereof before they just vote to forward the report as it is,” Castañares added.

UPDATE: This story was updated on May 17, 2019 at 1:18 p.m. to include testimony from Martin Galante of the San Ysidro Education Alliance regarding accusations of the PAC receiving funds from Castañares.