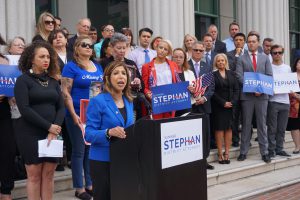 Supporters of Interim District Attorney Summer Stephan stood behind her on the steps of the Hall of Justice Tuesday to denounce advertisements funded by billionaire George Soros.

The advertisement, which has since been pulled from television, according to Stephan’s campaign spokesperson, claimed that Stephan is hesitant to use test results of rape kits.

“Now there are flatout absolute lies being told on the media in negative ads,” Stephan said. “I think that San Diegans deserve better, they deserve truth and they deserve that people are alert and aware.”

According to San Diego County campaign finance reports, the political action committee funded by Soros, California Justice and Public Safety committee, has spent $1.5 million since May 4 in support of candidate Genevieve Jones-Wright.

Stephan, who was appointed as interim District Attorney in 2017, has focused a large part of her campaigning on highlighting her work for victims of sexual assault.

On Tuesday, she spoke against the advertisements and asked television networks to inform San Diego voters that they were not true.

“When they see these ads there’s a presumption that people think that possibly there has to be some vetting that the ads have to be truthful, they don’t realize that the ads can be complete fabrication,” Stephen said.

According to a statement by Jones-Wright, Stephan has failed San Diegans and has changed her position of the issue of untested rape kits.

“Despite an annual budget exceeding $185 million, our opponent has only now conveniently found the money for testing a fraction of the backlog while running for office,” the statement reads.

The District Attorney’s Office announced in April that it was spending $1 million to test 1,000 rape kits.

Stephan was joined by victims of sexual assault crimes and mothers of victims who spoke in support of the District Attorney.

Jones-Wright has expressed that Stephan has not done enough and has emphasized that every rape kit must be tested.

This is the first time both candidates are running for District Attorney.

This story was undated Friday, June 1, to include a statement from Genevieve Jones-Wright.