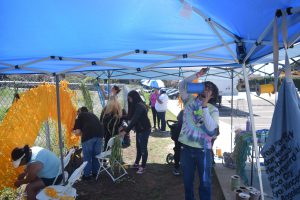 A blighted steel fence running along National City ‘s Kimball Way became a canvas for students from Chula Vista’s High Tech High campus (HTHCV) and local residents looking to bring some life to a neglected corner of this South Bay city. The group hung bird houses along a picket fence and ran colorful ribbon rope through the fence wiring to create a mural depicting a sunset. Wooden balloons, drifting away from a silhouette into the sky, will accent the length of the mural once completed.

The activity was the culmination of a six-month collaborative project between HTHCV and the National City-based nonprofit A Reason to Survive (ARTS), in which students learn how to create and pitch real-world proposals through an internship. The students developed three projects and ARTS selected a winning project and helped the students bring it to the City for approval.

The mural design was inspired by the story a man shared with students at Kimball Park, one block away from the project site. This resident shared that his favorite memory of National City was his graduation from Sweetwater High School in 1968, when his graduating class released balloons at the ceremony to commemorate the city’s 100th year anniversary.

“There really is a bigger significance to the mural because it is a memory many members of the community might have,” said ARTS volunteer coordinator Luis Velez-Vera.

Work on the mural along the fence is only the first step in this project. HTHCV teacher Megan Willis said that possible phases of the project entail having the adjacent lot, where a creek begins, become a park.

“This was our first intervention and if the community wants to buy into this idea we can have this space become a type of creekside park,” she said. “Right now the goal is to bring attention to this space and to prompt people to think it can be more than it currently is.”

In addition to drafting the project and and starting work on the mural, students also helped pick up litter and clear weeds from the creek area, this with support from the City of National City and the Port of San Diego, which also provided materials for the murals.