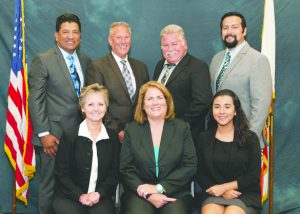 The Sweetwater Union High School District Board approved the assistance of a an outside financial group to examine a property deal made by then-Superintendent Ed Brand in 2005.

The School Board approved the deal on a 5 to 0 vote during the regular board meeting held at their administration center board room on Monday, June 13.

The land deal involves a property on L Street in Chula Vista near Bay Boulevard purchased by the District in 2005. Critics have complained for years that the land deal seems suspicious both in the way it was purchased and how it was handled by Superintendent Brand. The District spent $24 million in bond dollars to purchase the property, but transferred the ownership to a non-profit organization called the California Trust for Public Schools, and an LLC called Plan Nine Partners.

Since the District purchased the land, its value has dropped by millions of dollars. Over the years, the District has made debt payments on the property and estimates now put the loss at over $20 million.

An IRS audit began in 2013, but a recent letter from an IRS investigator criticizes the District’s actions. In a 2015 letter, the investigator says that “during the examination, it was difficult to obtain reliable and timely documents from the School District. The School District was not cooperative in submitting records requested.”

The approval was only for the retention of certain consultants and professional services in connection with the refinance explained Board Member Paula Hall at the meeting. The approval or dismissal of the actual refinance is planned for the board meeting scheduled for Monday, June 27.

The School Board also approved a resolution to put on the November ballot their proposal to create term limits for Board of Trustees seats. Sweetwater currently does not limit the number of four year terms members can serve.

The proposal, if approved by voters, will limit board members to two four-year terms, including any partial term which is more than two years. The proposal also specifies that if someone has served two terms, they will no longer be eligible for election or appointment for additional service.

At the same meeting, an amendment to their General Counsel’s employment agreement was included on consent calendar along other board items and approved unanimously by the School Board. The contract with Jennifer Carbuccia, originally approved on July 13, 2015, was extended through June 30.